Skip to content
Duke Learning InnovationBlogWelcoming Your Students to Class

At Duke, about 10% of our undergraduates (and 25% of graduate students) are international students, who may come with different expectations (or none at all) for the norms of United States university life. In addition, a number of our students are the first of their families to go to college. Professor Don Snow welcomes all students and clearly sets expectations to help all of his students be successful beginning on the first day.

Don Snow teaches Academic Writing at Duke Kunshan University. As he conducted the first class of Spring semester, I witnessed a group of uncertain, nervous new students quickly transform into eager, confident students ready to participate. He accomplished this magic by clearly laying out his expectations in a friendly, helpful way, and demonstrating that he was interested in each student. How?

As students hesitantly entered the classroom late, Professor Snow kindly welcomed them, assured them that it was okay to be late on the first day of class (but not for later class sessions) and asked the other students to make room for late comers.

He began by asking the students to stand up, find someone they didn’t know, and introduce themselves. Naturally, no student wanted to be the first to do so, which he understood and calmly repeated the instructions, encouraging students to begin by standing up. This exercise helped relieve some of the tension students brought with them, and let the students know they were to talk in class.

He explained how students should address him in class – he could be called Dr. Snow or Professor Snow, but preferably not Mr. Snow and never just Snow. He continued explaining that in a university setting, students would only use “Mr” as a title if the person does not have a Ph.D. Further, if a professor is okay with being called by a first name, they will say so, and that it’s better to be more formal if you don’t know. He suggested that the students pass the word around to others not in the class that he is not to be called Snow. The students relaxed noticeably during this explanation, as he demonstrated that he understood that some of them may not be familiar with the norms of US academic culture, and that he would help them. 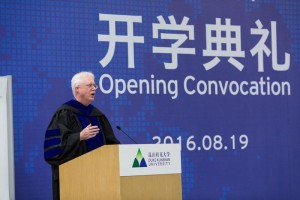 Because of the structure of orientation at Duke Kunshan, he had learned many the students’ names. He used student names when talking to each student, to both check on his memory and assure them that he was interested in each of them. Other faculty who wish to encourage students by using their names can have students write their names on cards propped up in front of them or use name badges.

He continued to set student expectations by pointing out that part of University life was email, and that students should check their email at least once each day.

He then went on to explain the course goals, weaving in his expectations about late papers, use of electronics in class, and use of Word when writing. Periodically, he would stop and ask for questions, pausing significantly to give students time to formulate a question. Every time he paused, students did have questions, but only after at least 30 seconds of silence. Professor Snow’s demonstrated patience and interest in student questions continued to set a welcoming, inclusive environment for students to be able to learn.