I recently attended the 6th Annual Serious Play Conference at UNC Chapel Hill’s Kenan-Flagler School of Business. Serious Play is “a leadership conference for both those who create serious games/simulations and those who implement game-based learning programs.” Serious games – a term often used synonymously with ‘educational games’ or ‘info-tainment’ – are games developed for K12, Higher Ed, and/or various industries to train, teach or inform. They run the gamut from simple, mobile games that say, remind a grocery store checkout clerk how to properly handle heavy products to immersive, online ecosystems that allow students to make critical decisions about physical and economic development. As Lucas Blair (Little Bird Games) put it: “serious games claim to make you better at something in addition to the game.”

Here’s some of the overall themes I encountered:

Great games are intentionally designed with a focus on the player’s experiences and outcomes. Just like great teaching is not just ‘telling’ – great game design allows gamers to learn through choices – often based on a multitude of different motivational factors. Game designers think carefully about the types of players a game might have, matching different types of interactions and features to different player motivations.

Modern educational game design and development, much like designing and developing modern online courses, also requires a team. A single teacher can’t really be expected to do all of this alone. They need teams with development, programming, art and design expertise (among others). For games designed for larger audiences, some even suggest that you need more than one teacher — that we can ultimately develop stronger, more successful games by tapping the expertise and knowledge of teachers from many different places, backgrounds and opinions.

Daniel O’Keefe from the Institute of Play drove both of these points home by leading us through a series of quick, team game-building and critiquing activities that forced us to quickly learn about and experience several gaming principles (see photo) for ourselves. 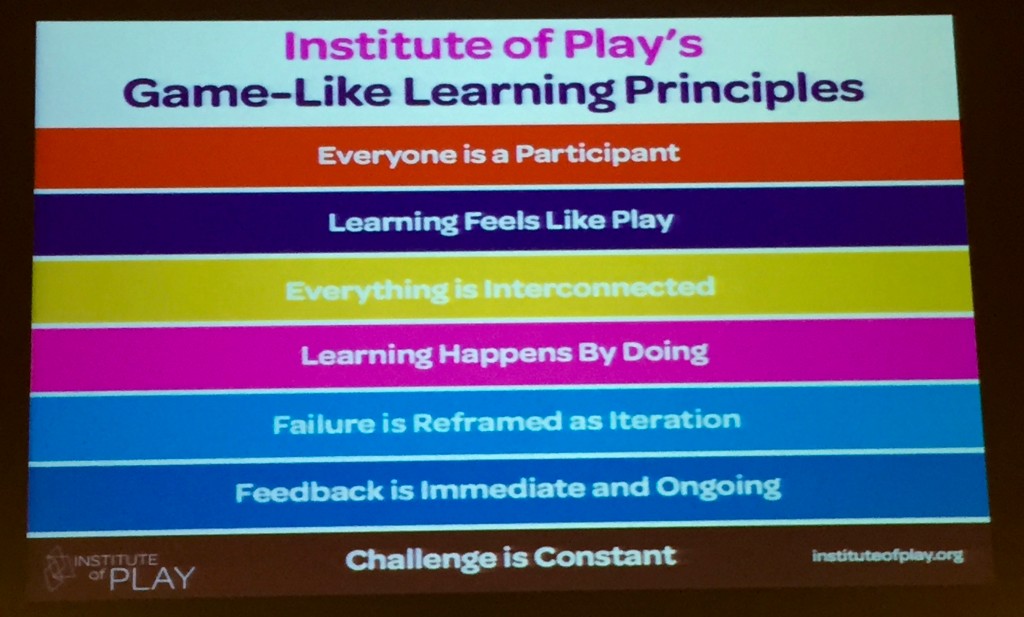 Many presenters questioned the development of so many games that simply ask for a return of basic facts and knowledge when everyone can easily ‘Google’ anything. The real value of a game is providing a way to learn something via an interaction with choices.

In their presentation on The Edugaming Framework, Steven Weitz and Mary Rasley demonstrated a way to rethink teaching a simple mathematics principle as a game (vs. assigning another quiz). Even without developing an actual game itself, the act of rethinking the original quiz question from a gaming perspective provided a new way to highlight the concept of the formula vs. just understanding how to work it. 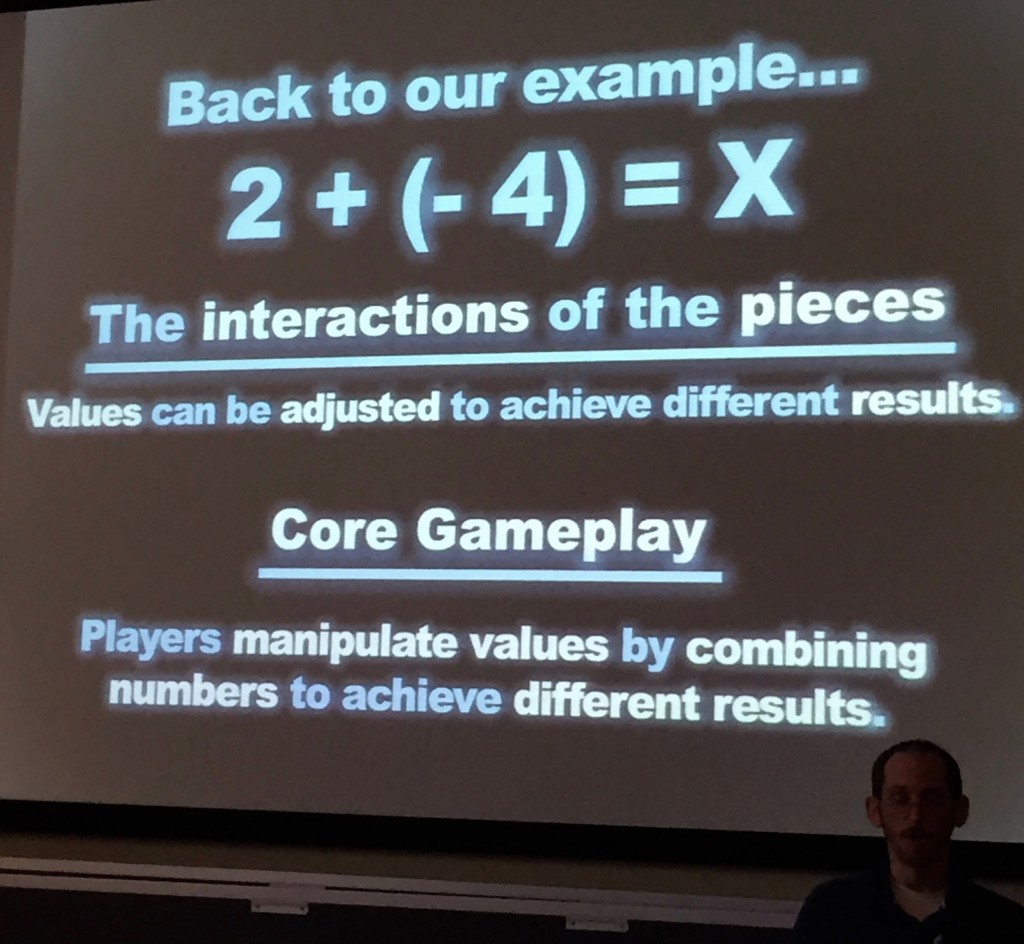 Serious/educational games often get a bad reputation for being incredible droll, boring, procedure affairs that fail to invoke much in the way of a fun or challenging experience. John Krajewski (Strange Loop Games) pointed out that trying to add ‘fun’ to education and/or trying to add more ‘education’ to fun doesn’t seem to work. The learning must equal fun from the start — and fun begins with freedom and choices. Steve Weitz showed us what PacMan would be like if we removed most of the choices: 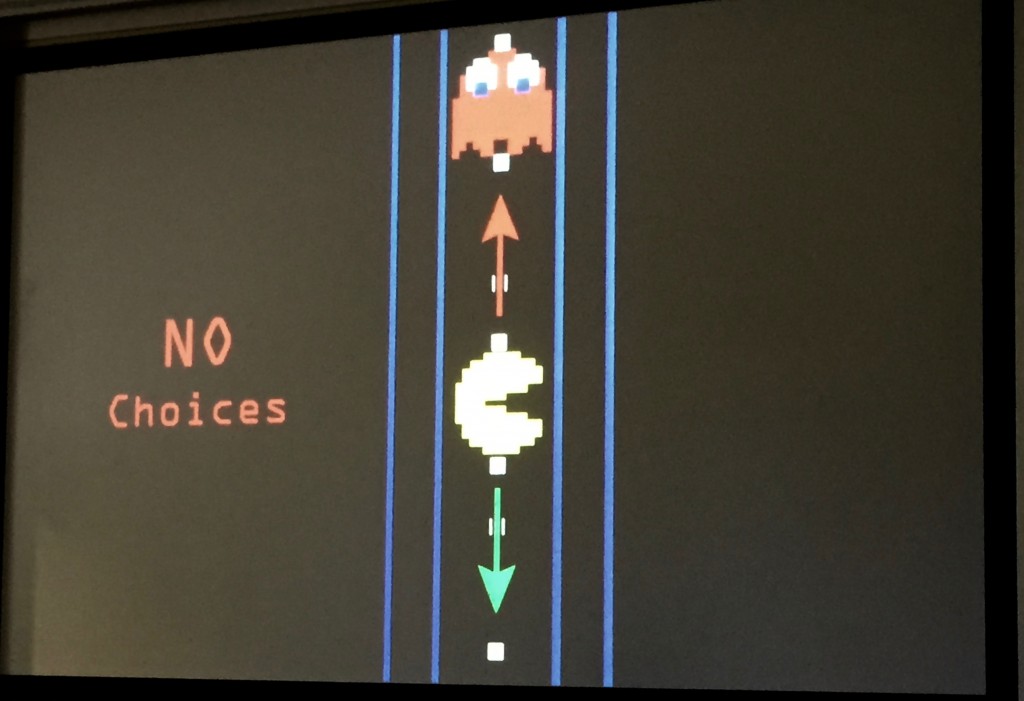 In his book Man, Play and Games, Roger Caillois wrote “there is also no doubt that play must be defined as a free and voluntary activity, a source of joy and amusement. A game which one would be forced to play would at once cease being play.” Again, the essence of a good game might boil down to choices – including the choice to play the game in the first place.

4- Virtual reality and augmented reality need to grow up

Jesse Schell (Schell Games) reminded us that we’re only in the early stages of a long virtual reality (VR) revolution. Cheap wearables like Google Cardboard make it easier for everyone to at least try a simple virtual reality experience, but new, more immersive tools (untethered to computers or purpose-built rooms) have yet to become more fully available. The upcoming generation of VR tools will focus on the addition of hand interaction (see photo below). 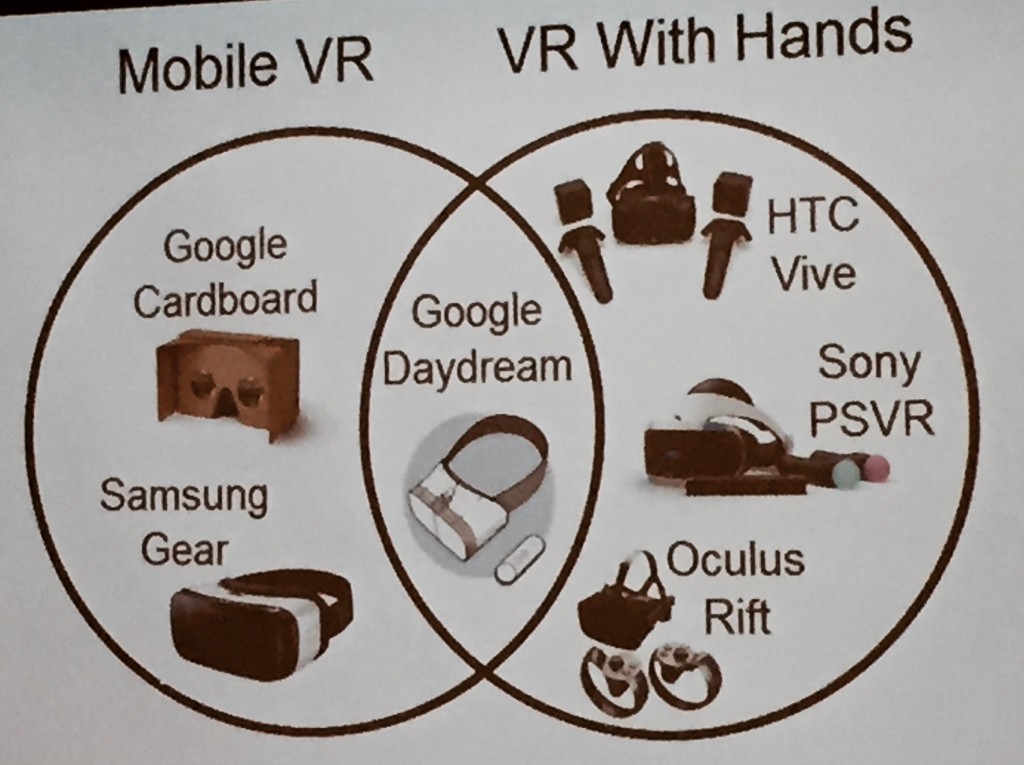 Schell shared a powerful example of a VR simulation that casts the player as a bystander being questioned by police during a heightened confrontation. He explained that “these technologies let us see from the Point of View of others” and might in the future lend themselves to being tools that can impact our capacity for empathy, stating “the Internet let us learn to think with shared memories – VR will let us see with shared eyes.”

Schell also noted some of the challenges for VR adoption in education: 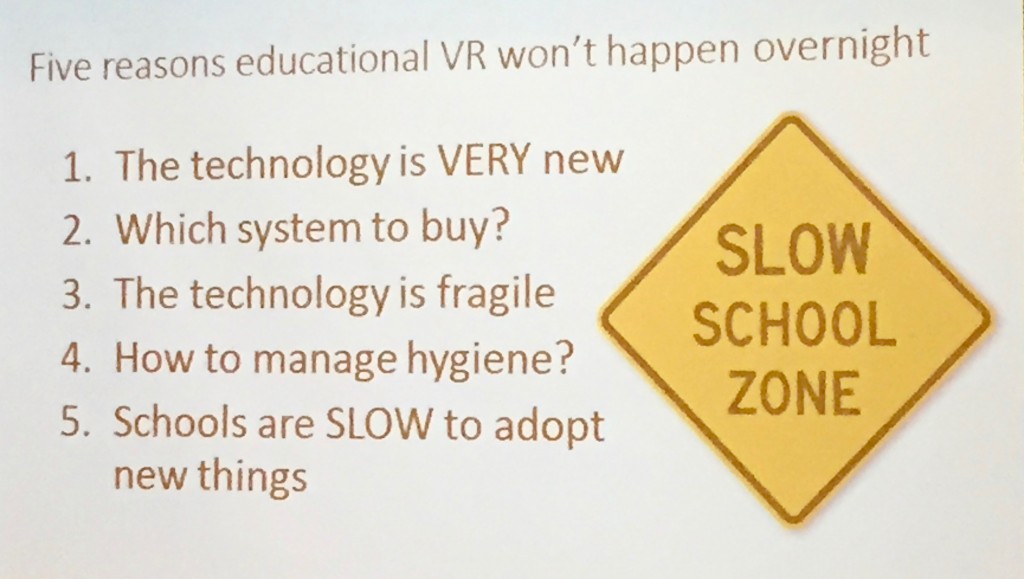 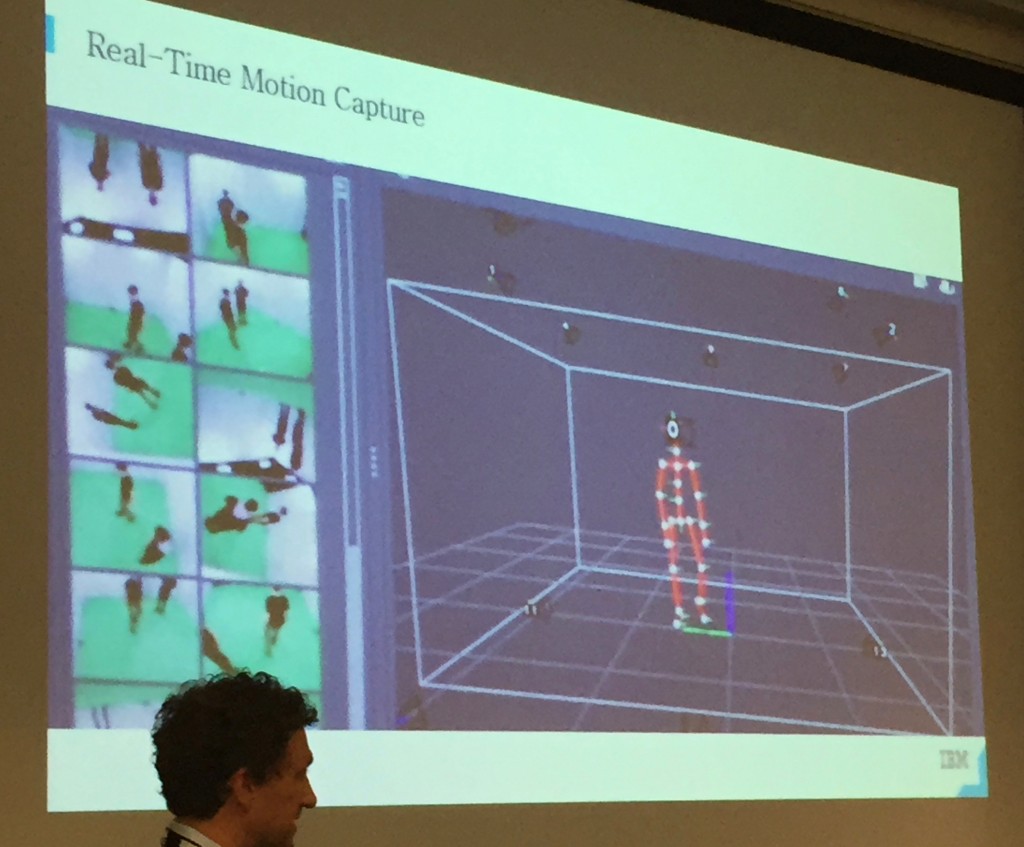 Next, they take this data and couple it with an overview of a work-site – tracking each worker, their stats and potential for injury, etc. 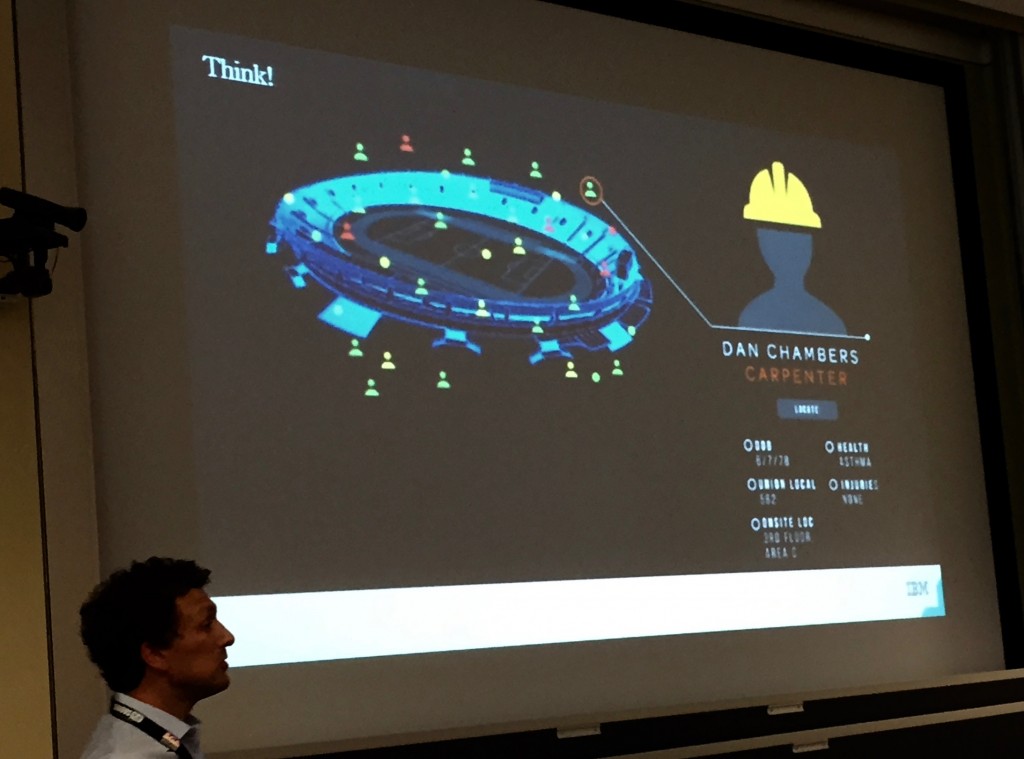 In another example, Stowell described using sensors to record multiple aspects of a regatta race. After the race, IBM teams took all the real-world data and fed it back into a game-like visualization of the race that allowed the captains and crew to analyze their performance and even play out different decisions and scenarios. 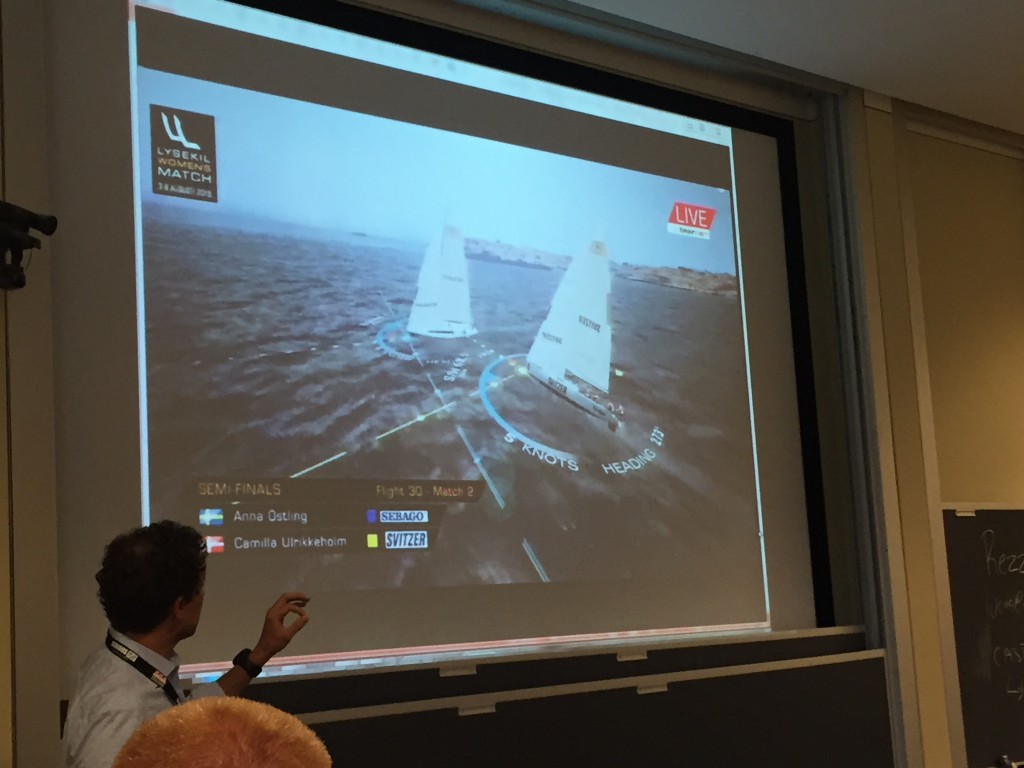