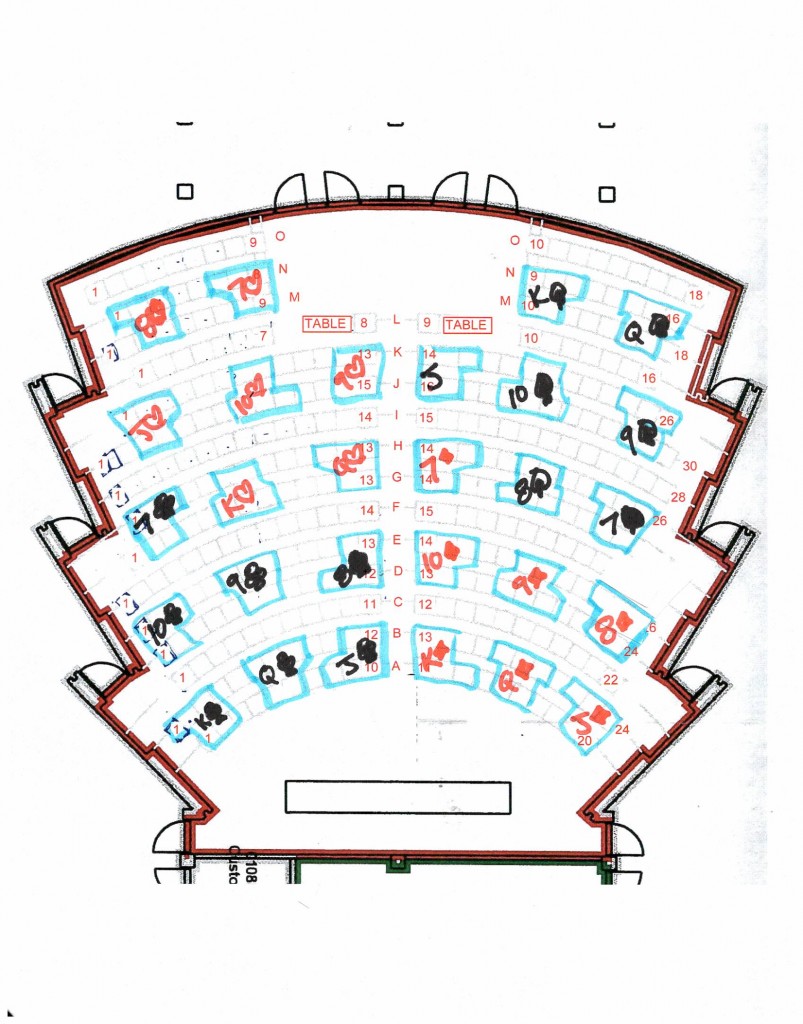 In Professors Amanda Hargrove and Dorian Canelas’s Organic Chemistry course, 143 students entered Gross Hall 107 and settled into small groups.  They read the projected warm-up question, asking them to chose the correct name of the pictured alkene. As students used i>clickers to answer, Professor Canelas explained what they would practice that day, encouraged students to start their next homework assignment, and then checked the class answers to the first question. She congratulated the students for selecting the correct name, and moved to the next question where students chose the correct order of a set of atoms from least to most electronegative. A low murmur of students checking in with their neighbors accompanied student clicker responses.

After the majority of the class had clicked in their responses, Professor Canelas (who was leading this particular class session) selected student names randomly from slips of paper in a cup, asking the students identified to explain their answers. A third warm up question was displayed, students indicated their answers using their clickers, and Professor Canelas asked for volunteers to explain their answer.  She then amplified on the student responses with a quick sketch on the blackboard.

In summary, in this flipped classroom, within the first few minutes of class, students individually assessed their preparation for class by answering questions, and the instructor provided immediate feedback and held students responsible for their preparation in several different ways.

Professor Canelas then followed up with a few more review questions, woven into a brief lecture that addressed the concepts students needed to participate in this class. As the class prepared to transition to group work, Professor Canelas described a visit from previous students who thanked her because the class structure prepared them well for Organic Chemistry 2.

Students groups then applied their knowledge and teamwork to address more complex questions. Each group opened their folder containing the day’s worksheet, designated a recorder, and tackled a set of problems. Both instructors and the teaching assistants circulated, checking in and responding to raised hands to encourage discussion.

How does teamwork work in an auditorium-style classroom with over 100 students?

Students were seated such that every third row is vacant. Each group includes students from two adjacent rows, students in the back row leaning forward to work with the students in the front row who turned to talk with them. Instructors and TAs accessed the groups using the empty rows in front of and behind each group. The seating chart here illustrates a possible arrangement for group activities (click to enlarge).

To facilitate randomly calling on groups, each group was named for a card (7❤, K♣). The instructor drew a card from a deck, to select which group (Q❤, 9♣) would be responsible for filling in the answer to a problem on the worksheet displayed on the front screen using a document camera. The selected groups sent their reporter to the front of the room to write in the answer on the worksheet, visible to all. Once most groups had answered, Professor Canelas directed attention to the written answers, asked if the other groups agreed or disagreed, and talked about the logic behind the problems. Because students had been talking about these problems, a number of them asked thoughtful questions. In some cases, Professor Canelas began to solve the problems on the blackboard, stopping at each step so the students could prompt her for the next step.

After Professor Canelas addressed questions and students asked for clarifications, students then responded to projected clicker questions to check their individual ability to think about similar problems. Finally, the instructor completed the class with a brief summary, pointing out the important things they learned. Student groups handed in their worksheets (a subset, selected randomly by again drawing cards, would be graded carefully, the rest will get full credit). In addition, each group handed in an additional sheet they had used during class to create a list of concepts that the group learned that day and one important unanswered question they still had about a concept.

How do students prepare for class?

Students were provided with a unit plan for each of the 11 units, containing:

The instructors provide copies of the in-class worksheets and keys, slides used in class, previous semester tests and keys, links to tutorials and animations and four different sources for students to seek tutoring. This course includes laboratory and recitation sessions, supported by additional problem sets. Students can use the learning outcomes associated with each unit to identify where they need practice or help. All materials are accompanied by study tips and strategies to help students be successful.

For more information, check out the course syllabus and the unit plan for Unit 3.

What does the instructor think?

Although I’ve had many one-on-one or small group discussions with students during office hours, having the students all work together on problems during class was very eye opening for me as an instructor. Through this classroom format, I became aware of several common long-held misconceptions and areas of misunderstanding that a significant fraction of students encountered while they tried to work chemistry problems on their own. This gave me an opportunity to address a misconception directly with the whole class right at the moment that it mattered most to students rather than just with one or two people in my office. I’m hopeful that this helped more students realize that they can understand the basic mechanisms behind what they are learning and practicing in every problem rather than just resorting to memorizing problems and their answers.

Although some Duke students are very aware of their areas of confusion during a traditional lecture, more students do not realize they don’t completely understand something fully when trying to work a problem. For some, this happens late at night in their dorm room or the library. Therein lies a tremendous advantage of the flipped classroom: students notice that they are not completely understanding a problem right at a moment when they have peers and even an instructor right there to discuss the problem.

Also, in large classes, it can be difficult to get to know many students. The flipped format made it easier for me to identify with each student as an individual rather than just a face in the crowd.

Team teaching with Professor Canelas was an incredible learning experience for me. Having had no previous experience with a flipped classroom, it was a great opportunity for me to observe its implementation and then employ the strategy myself for the second half of the semester. The increased level of student engagement in the course was tangible, and I plan to incorporate elements of team based learning my future classes.

What do the students think?

Given the large class and the range of students, some were less positive about the flipped classroom experience, preferring the familiar lecture.

Class instruction was probably more helpful than the group work . . . it was difficult to learn entirely new concepts only with peers.

I learned a lot but sometimes the overall group dynamic wasn’t helpful and just confused me. However, I did find the worksheets as helpful in the long run as introductions to topics . . .

I could see the benefits of a reverse classroom, however in organic chemistry I think that it is a course that requires more lecturing.

Other students were enthusiastic about the format:

. . . having us work in groups forces us to learn and understand the material. Often, we help each other explain concepts, with both furthers our understanding (or highlights a lack of understanding) and provides and alternative viewpoint for others. This has helped me immensely in understanding the concepts in this class

I actually really enjoyed the structure of the class as “flipped” even though I was really hesitant at the beginning of the year. Despite not being very disciplined about my reading the book and staying ahead of the material, the [in class] worksheets were really helpful in learning and made it harder to procrastinate and learn nothing for any amount of time.

I liked that the lack of the curve promoted a cooperative classroom atmosphere . . . and incentive to work together and form study groups.

I felt the the flipped-classroom setting was the best way to learn organic chemistry because I felt it made the best possible use of the class time.

More about flipped courses at Duke

Statistics 101 taught by Dr. Mine Çetinkaya-Rundel

Food in the Jewish Tradition taught by Dr. Laura Lieber

The Politics of Public Policy taught by Dr. Nick Carnes