Skip to content
HomeBlogWhen is a Selfie More than a Selfie?

Have you ever had a fascinating conversation with someone and wished you could share it with your students and colleagues? How about sharing the experience of a unique environment that illustrates a critical element in understanding a complex issue? Modern technology has now made it possible to do exactly that with just a little planning and your cell phone!

As David Boyd travels around the world studying global health, he has discussions with key informants in a variety of settings. Often, there is neither the opportunity nor a facility in which to conduct an interview in a formal setting. However, Boyd, an Associate Professor of the Practice in the Duke Global Health Institute, does not let that stand in the way of exposing his students to ideas and experiences he can only capture in the field.

Stated as a fact –traffic accidents are the largest proximate cause of death among young Vietnamese – comes across as a little dry. However, Boyd had a companion use a cell phone camera to capture hims 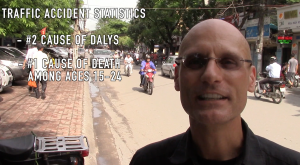 elf crossing a street teeming with unregulated traffic in Hanoi. Standing on the curb as traffic whizzed by within inches of him, Boyd gives a brief talk about the rise of traffic accident morbidity and mortality in the developing world; the viewer feels the visceral impact of what learners may otherwise see as tedious statistics.

Boyd also used a cell phone camera to record an interview with Dr. Bill Pan, an Assistant Professor at the Duke Global Health Institute, in a garden in Kunshan China. Although both Boyd and Pan are colleagues at Duke, when they crossed paths in China at Duke Kunshan University, Boyd used the opportunity to interview Pan about the effects of population change and the environment on health.

Using video effectively doesn’t require a sophisticated video production facility or even advanced equipment. A simple video recording device such as a cell phone or tablet can be used to exploit opportunities to increase learner engagement.