Skip to content
HomeBlogGoogle Glass for Teaching & Learning: What can I do with Glass?

Since the Spring of 2014, CIT has been testing the Google Glass Explorer Edition for potential teaching and learning uses at Duke. We’ve discovered some interesting uses for this revolutionary technology which could impact the Duke academic community in positive, engaging ways. 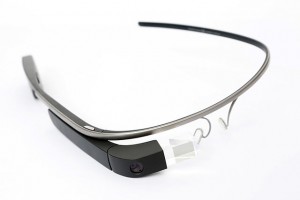 Glass is a device you wear much like a pair of glasses- though the device features only a single prism resting near the user’s eye; thus, the singular pronunciation of the device’s name (these are not ‘Google Glasses’). When the device is on, a slightly transparent visual display the size of a mid-size TV monitor rests above your vision and out of your line of sight. Since the device is so close to the user’s face, the device is intentionally designed to be as unobtrusive as possible.

There are features such as the HD camera which are familiar to smartphone users. For tactile controls, there’s a  button to take pictures, an on/off button, and a directional touchpad. Various sensors embedded in the device include a gyroscope to detect head movement and position, as well as an eye sensor which can take a picture with the wink of one eye.

When you put Glass on, you’ll notice it displays the time, and two magic words, “OK Glass.” Say this, and a list of suggested commands appears in the display. From there, you can say a command like, “record a video.” 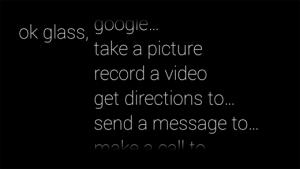 While the user scrolls through menus with the touchpad, it’s worth noting that textual input functions entirely by speech- there’s no keyboard to be found. You can ask questions through Glass: “Google: what’s the square root of 576?” “Google: How tall is Kevin Garnett?” (he’s 6’11”). These answers are spoken back almost immediately, at the speed of a Google Search.

Once the Google Now and GPS services are activated, you can ask more personalized, location-based questions such as: “Is my flight delayed?” Glass looks up that real-time info on the web, and tells you the plane is running 15 minutes late. Ask, “How do I get to Duke Chapel?” and Glass will direct you via Google Maps. You have a text? Read or listen back to the text, then say, “reply”and dictate a response. Your response is displayed and read back, and a “send” command does the trick.

These simple voice commands and personalized suggestions will get better over time as Google receives more input and rapidly updates its algorithms. In their current state, these are often surprisingly useful and quick. However, voice commands really only scratch the surface of the capabilities that Glass allows, particularly when you load some of the 70+ apps through the “Glassware” store. We reviewed Glassware apps that represent a range of teaching and learning use cases.

As Steve Toback has illustrated in his posts in the Duke Digital Media Community (P.S. thanks to Steve for letting me test Glass out!) the Word Lens app is a great place to start when demonstrating the capabilities of Glass. If you see some text in a foreign language on a sign or a book, just select the language and point your head camera towards the text. It is translated into your native language and displayed in real time on your viewfinder.

This app, and other augmented reality apps for Glass, are particularly great specifically because they underscore a few key differences in functionality between a mobile device like Google Glass and a simple head mounted camera such as a GoPro: Glass is a computer, and it can send and receive data wirelessly, and a standalone camera serves the sole purpose of taking pictures. Glass takes your perspective in real time and gives you another perspective on what you’re seeing, which is a conceptually powerful concept for learning.

While you can ask the device aloud how to say a phrase in another language, and receive the translation back (as a google search), the impact of the real-time visual display is quite impressive.

Last fall at the 2013 Southeast Educause Regional conference, I met a group from Ball State who presented on their app, “The Traveler.” At the time, their app for Android had been field-tested on study abroad programs, and found to be a useful additional tool for capturing the student learning experience while abroad. It was remarkable how closely the instructors’ vision was translated into a usable, flexible mobile application for Android. 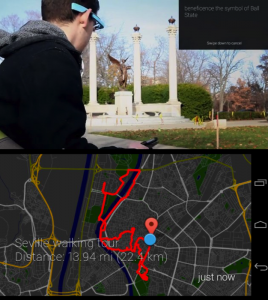 The app was designed by a dedicated team at Ball State for students studying European architecture. They used the app to not only take pictures, video, and text notes, but also draw sketches. These items were automatically geo-located and synced to cloud servers, so that students and faculty would be able to review the paths and sights they saw along the way using an automatically generated interactive map.

Recently, the Traveler app was released in the Glassware store for download, as a companion app to the Android version. In preliminary tests I’ve discovered that it could be a promising app to use beyond traveling- possibly for journaling in the field for science projects, for documenting a storytelling project, or anything else that may benefit from short-form, geolocated media.

While many Google Glass apps are designed to be a passive, “taking-in” experience, The Traveler app on Glass was unique in that it focused on actively capturing the student experience from a first-person perspective. I prefer educational technologies that allow for student engagement by encouraging students to construct knowledge, and The Traveler app does this in an interesting way.

Duolingo is a free web application for language learning that we’ve followed since it was released in 2012. It encouraged students to be active participants in their own learning, and develop mastery for themselves. Duolingo as a web application and platform is still quite innovative in the approach that it takes towards crowdsourcing translations, in that it actually allows you to translate real text from the web while learning. 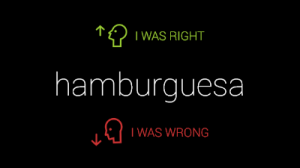 However, it was disappointing to find that none of the above innovations were included in the Duolingo Google Glass application. Instead, Duolingo through Glass is a simple flashcard app, operated by nodding your head up and down. It is a mere shadow of the interactive, relatively engaging experience that we were accustomed to in its other web and mobile forms. We hoped that Duolingo for Glass would allow translations via voice recognition, or other features that really utilize the unique capabilities of the Glass platform. While the app might develop further in the future, we were dismayed that this app didn’t live up to the richer experience that we were expecting.

There are a number of bright spots that show great potential for teaching and learning, despite mobile copycat apps. The Star Chart app allows the viewer to look up at the sky and spot celestial bodies in real time. While augmented reality apps like these work on your smartphone as well, Glass really shines as its transparent, handsfree, out of the way frame turns what would be typical screen-gaping into an experience that does feel truly futuristic. In testing, we found that a major benefit of this app is that the dark display would allow users to adjust your eyes to the night sky.

These types of apps which require the viewfinder and camera to be constantly running unfortunately drain battery and cause the device to run hot after continued use. Sometimes it only takes 15 minutes of heavy use and the device may need to temporarily go to sleep mode in order to cool the battery.

This limitation is frustrating, but understandable given the small form of the device. Furthermore, the point of Glass in its current iteration is not to be an extended-use device like a smartphone, tablet or laptop. The idea with an app like Star Chart is to take a moment to glance at the constellation information, then nod to turn the device off. When you want to find another constellation, wake the device back up to continue searching.

Other apps that could prove useful for teaching and learning include Layar, which allows you to see augmented reality “Geo Layers” in real time on your screen, and Field Trip, which points out geo-located items as you pass by them. These type of app could be used for wayfinding and discovering knowledge at key locations which might be otherwise ignored if your mobile device is sitting in your pocket. They could even be used for novel uses like viewing virtual or historical overlays in real-world locations.

Thanks to Justin Johnsen, Willie WIlliamson, and Kun Li for their testing and insight contributions to this article.

3 thoughts on “Google Glass for Teaching & Learning: What can I do with Glass?”