We are about one month in to the third session of Duke’s MOOC on Human Physiology, a popular course with over 32,000 students enrolled, and are excited to release some of the findings from our pre-course survey. As in most MOOCs, the students in this course tend to be college-educated young adults from English-speaking countries. However, as shown in the charts below, there are students ranging in age from under 13 to over 65, and at all education levels. Over 3,000 students have no previous formal post-secondary education (remember, even 1% of students in a class this size equals over 300 people!). While the United States and Canada have the highest enrollments, students come from many other countries as well. 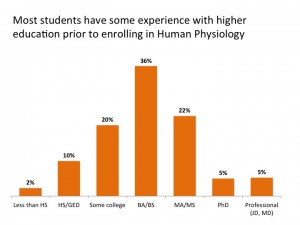 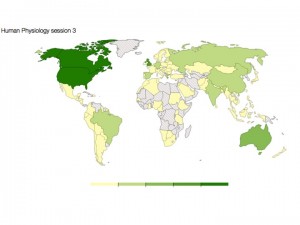 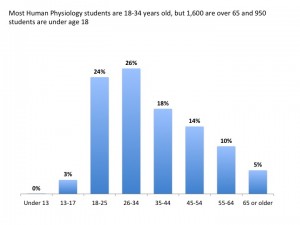 What motivated students to enroll in this course? As we would expect with a scientific course such as Human Physiology, just over half the students said that an important reason they were taking the course was because it was relevant to their field of study or would teach them career skills. However, the most common reason given for taking the course is simply that students expected it would be fun and enjoyable. Only about 1/3 of students felt that the Statement of Accomplishment was an important factor that motivated them to enroll. 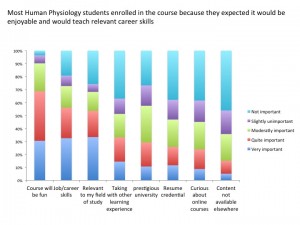 Most Human Physiology students had previous online learning experiences before this course began. As shown below, only 31% of students had never taken any type of online class before. The first time that Human Physiology was offered, in the spring of 2013, 38% were taking their first online class. It is likely that this number will continue to fall as MOOCs continue to grow in popularity. 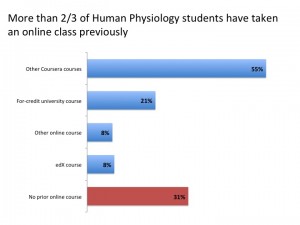 Another trend to note is a move towards accessing course content on platforms other than a desktop or laptop computer. While most students – 82% – plan to use a computer as the primary access point, 18% or over 5,700 students anticipate using primarily a mobile device or tablet. It is not uncommon in developing countries for a smartphone to be the first and only computer that people own. In future analysis, we plan to evaluate whether there are correlations between student locations and the technology platforms being used to access a MOOC. 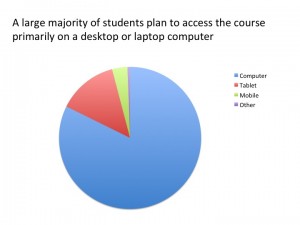