Before his course about the origins of the 9/11 attacks began, David Schanzer was concerned it would be difficult to present this controversial and emotionally heated topic in an open MOOC format. He worried that 9/11 conspiracy theorists and Islam haters would try to derail the discussion forums. He was right. However, their voices were quickly drowned out thanks to a clear and focused discussion forum policy and the desire by the majority of students to learn.

Their exit demonstrates the power of the MOOC format rather than its weakness. Many with a narrow agenda quickly lost interest. Instead of having their biases reconfirmed, as they are on some platforms that attract like-minded people, they were challenged by those who were more interested in learning than shouting at each other. They realized that the course was not about imagined controversy rather about an intellectual discovery of the nature of terrorism, the ideology of al Qai’da, the radicalization process, and weaknesses in American counterterrorism policy prior to 9/11 that allowed the attacks to succeed. One student commented:

“For a subject of this importance that has had such a major impact on today’s world, it’s amazing how much ignorance and misinformation there is out there.  I think everyone involved with the course is doing a service by making this information freely available.”

In fact, the strength of Professor Schanzer’s course is that it opened students’ eyes in ways they did not expect.

Before the students examined the origins of al Qai’da, they learned what al Qai’da is not — representative of the Islamic faith and Muslims as a whole. One entire week’s lectures consisted of an interview with Duke’s Muslim chaplin Abdullah Antepli, who spoke about the history and practices of Islam, plus controversial topics such as ‘jihad’ and ‘shariah law.’ His words were revealing for many students. As one student explains,

“Like many I know who watched the events of 9/11 unfold, I knew little to nothing about Islam and what being a Muslim meant and nothing at all about the core beliefs or pillars of Islam. And though I would hardly claim to be an expert on the religion now, I do find the similarities between Islam, Judaism and Christianity to be comforting, as well as interesting.” 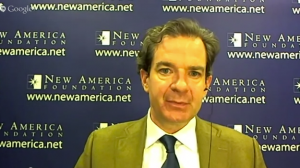 The course experimented with multiple methods of presenting content besides the traditional video lectures consisting of slides and a talking head. Schanzer moderated discussions with former students to give an idea of what it would be like to sit in a regular Duke classroom. He also invited guests to participate in live video chats with students. These provided insight into different facets of the 9/11 story and proved to be popular. His guests included Peter Bergen, who is well-known for conducting the first interview of Osama bin Laden, and Jan Ramirez, the curator of the museum at the World Trade Center memorial site. The video chat recordings are visible on the course’s YouTube channel.

Students appreciated these opportunities. As one wrote, “I enjoyed the many Google hangouts.  It’s great that these experts were willing to take the time to share their views and answer questions.”

Students had two writing assignments in the form of policy memos during the course. The task of synthesizing information and giving policy recommendations in a short, clear memo was a new skill for many participants. These peer-evaluated assignments showed the depth of the students’ engagement with the content of the course. In their final project, students could write an op-ed article or record a television/radio address as if they were a high-ranking government official on September 12, 2001. The goal was to summarize the course topics and make recommendations for the United States, or their own home country, on how to move forward after the tragic event. Here are a couple examples of what the students created.

After reviewing a sample of these final projects, Schanzer remarked, “I am blown away by the effort many of these students put into the projects. They were creative and engaging, but more importantly, they demonstrated a mastery of the course material. It was gratifying to see the course’s core message reflected in the students’ hard work.”

A companion course covering the US response to 9/11 in both domestic and foreign policy changes, Responding to 9/11, is open for enrollment and will be taught in Fall 2014.

Some further student comments as the course wound to a close are shared below.

“I would like to add my thanks to Professor Schanzer and the entire team. While this course was more demanding on my time than I initially anticipated, it was also far more rewarding than I expected. While I know that we do not get course credits for this, and it is more for self-learning than anything, I would just like to say that it has provided an extra dimension to my understanding on International Relations, Foreign Affairs and Global Security. It has helped me immensely in my work at an embassy, and in particular the practice at writing policy memo’s has been invaluable. I am currently exploring the option of returning to university to write a PhD, and I have gained some meaningful inspiration and insight into what I might focus on.

This course also helped me to become inspired again, and as a professional, reminded me of my roots and why I am interested in working in International Relations. I greatly look forward to Part 2 of the course, and would like to thank everyone involved for making this a course I was very proud to be a part of.”

“This course had it all – the face to face lectures, a wide array of readings, interesting student forums and some exceptional Google hangouts with some great guest speakers – and the assignments allowed students to think, build their knowledge, and to put themselves into the mindset of some of the government officials on that day. Bravo. I have learned a lot of new information about the events of 9/11 that certainly allow me to put that truly terrible day into a much more considered perspective. Thanks.”

“It was an amazing, enriching, compelling and engaging experience. I enjoyed every minute of it. I have joined several Coursera courses and by far I have been impressed by the quality and variety of the material available. I am also very pleased with the truthful, sincere and rigorous attitude of Professor Schanzer towards the course. He allowed open discussions in a truly academic environment without preconceived or biased methodology. His analytical approach and his willingness to address this sensitive issue honestly and thoroughly are evidence of the excellent intellectual level of Duke University. My warmest appreciation and recognition to Professor Schanzer!”

–This blog was co-written with Justin Johnsen and David Schanzer.