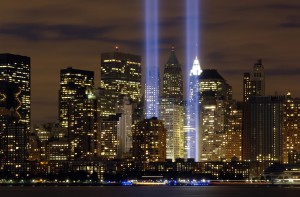 David Schanzer, a professor at the Sanford School of Public Policy, has been working throughout the summer to adapt his Duke University course into an online course. The Coursera version is the first of a two-part series about the attacks of September 11, 2001. Part I focuses on explaining why the attacks occurred. Over seven weeks, students will learn about the development of radical Islamic extremism, the roots of al Qai’da, and the radicalization process. Students will examine U.S. counterterrorism prior to 9/11, learn why these policies failed to prevent the 9/11 attacks, and then consider the policy challenges facing the world on September 12, 2001. Part II of the course, to be presented in 2014, will examine the policy response to the attacks – including discussions of the use of force in Afghanistan and Iraq, drones, detention policy and interrogation, surveillance and intelligence collection, and homeland security.

This summer’s preparations have meant rethinking how to capture the discussion-based atmosphere that is a hallmark of his traditional course. The primary strategy was to build in online discussion forums for Coursera students to debate issues that would come up in the classroom. Of course, Schanzer created video lectures for much of the materials of the course. They are supplemented, however, with video interviews of key White House policy maker Juan Zarate, journalist Peter Bergen (who interviewed Osama bin Laden), and the radicalization expert Peter Neumann. Students will experience what it is truly like to be in a Duke classroom, and face Schanzer’s tough questioning, through videos of small seminars with students.

Along with the delivery of the content, Schanzer has been concerned with how to assess student learning in a course that would typically be graded on the basis of writing projects. In the case of the Coursera version, there will be a few quizzes that test knowledge of the content of both the readings and videos. However, the majority of the grade will be based on peer assessments. Students will be asked to put the knowledge they gain into action; for example, writing a memo for a mayor who must talk about a recent shooting in his town that may be perceived as terrorism. The final project is to write an opinion piece for a newspaper or stage an interview with a world leader that takes place on September 12, 2001. It is left up to the students if they would like to work alone or with a group or partner. They can also choose from three different kinds of submission — writing, video or audio. The final grade is based on the ratings of five colleagues in the class. As such, creating a detailed and fair rubric has been as important as stating the goals and instructions for the assignment.

“Even though a dozen years have passed,” Schanzer believes that “the forces that led to 9/11 are still shaping our world today.” The horrific conflict in Syria, the political chaos in Egypt, and instability and threats in Yemen all are connected in some way to 9/11. And 9/11 unleashed the controversies over drones, Guantanamo, NSA surveillance, and government secrecy that are roiling in the United States and around the globe. “Students will learn a great deal about 9/11 in this course, but more importantly, this course will help them to better understand the world we live in today.”

“9/11 and Its Aftermath – Part I” begins September 9 and ends in the first week of November. Sign up for the Coursera class now.