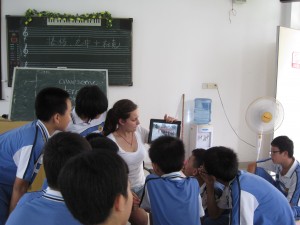 During Summer 2012, a number of Duke students travelled to Zhuhai, China as part of the DukeEngage program.  Duke students in the program teach English at Zhuhai No. 9 Middle School “using various art forms—all of which integrate leadership, self-confidence and self-expression. From songs and games to simply holding basic conversations, Duke students will expose Chinese students to a form of education to which they have never before had access.”

Hsiao-mei Ku, director of the program and Professor of the Practice in the Department of Music, requested iPads in order to help her Duke students communicate with and teach the middle school students.  Additionally, the presence of the iPads helped create connections between the students and their teachers, bridging a number of initially uncomfortable gaps.

“With over 2500 students at Zhuhai No.9 Middle School (Grades 7-9) and over 60 kids per classroom, these young Chinese students have never been encouraged to voice their own opinions at school,” says Ku. “That was the most frustrating thing that DukeEngage students encountered when we arrived at the school and tried to interact with the Chinese kids in class. To make things worse, the Chinese kids were shy, uncomfortable, and withdrawn when they encountered the “foreign” teachers. Thanks to our new technological resources, a wonderful thing happened: the Chinese kids’ faces lit up when the iPad appeared. Lessons taught using iPads not only satisfied Chinese kids’ curiosity about the newest technology, but also broke the ice quickly in the classrooms. These newly created bonds then moved outside of the classroom and allowed friendships between Chinese students and Duke students to blossom. The addition of the iPad to our program this past year truly enhanced the teaching and learning experience of the Duke students and the community they served.”

Since the students in the DukeEngage program had varying levels of Chinese language proficiency, they used applications such as Pleco and iTranslate to assist with translation.

The following are comments from the Duke students involved in the program detailing how they used their iPads:

…I synced all the photos from my computer to my iPad, so I was able to show my classes pictures of America, my house, and Duke.  When we took an excursion to other parts of China, I also put my pictures on the iPad and showed the students the places we had gone.  They recognized many of the places and we could then start discussions about history or different regions of China.  It was much easier and convenient to have these pictures on the iPad than to bring a computer, and much easier to see than on a camera.  When we traveled to other schools, I was always able to bring the iPad and quickly share photos of my family and life in America.  I also put cartoon movies onto the iPad and then showed these to my students, frequently pausing to ask them questions in English (and requiring English responses) about the movie.  Besides teaching, the iPad was really useful for staying in contact with my family because I could use iMessage when I had internet and it was just like texting them.  One last use – the students loved to play games that they recognized on the iPad like Fruit Ninja and Angry Birds. They thought it was amazing that we also knew these games and it was often a good bonding experience to play these games together with the students.

The iPad was a wonderful resource to have on our DukeEngage trip because it allowed me to have a translator at the tip of my fingers, easily accessible videos for my students to watch and music for my dance classes all in one place. I used apps such as the translator, the piano, and DukeVPN that were really helpful and easy to get to. Also iMessage was particularly useful because I could communicate with…other DukeEngagers without having to use our few and precious Chinese cellphone minutes. It was a great teaching tool and overall aid on the trip.

The iPad was a useful teaching device that I used for all of my classes. It was lighter than my laptop, and the kids would be excited every time I used it. Our class size was about ten or fifteen kids, which allowed them to all watch videos of different topics we learned about. For example, I taught them about roller coasters, and showing them a first and third person view of some of the roller coasters made it exciting for them. One cool aspect about the iPad was that I could use it to store attendance for every class (we each had about 15 classes per week), and I could take notes on it without having to use any paper. It also allowed me to carry a portable dictionary around with all of its diverse apps. As a result, I have decided to buy one to use next semester at Duke.

The students from Zhuhai No. 9 Middle School also commented about their experience with the DukeEngage program and the use of iPads:

We really love the iPad to bring in our classroom. It’s a very  unusual experience for us, because Chinese never use it for us. With the iPad, we can get more things from the outside China, we can know more about the Duke teachers from the US. It is a visual teaching for us, I think that will be better than just chatting with us.

It is my honor to take part in The Duke Engage. the Engage has changed my life so much! I’d like to thank all of what you’ve down which made this engage better and better!

I am a grade 9 student now. In the past two years, the volunteers from Duke University taught us a new learning style! Since every volunteer were furnished with an iPad, we were exposed to native English. For example, teachers use iPad to show their photos in the US to us, show some videos to us. And with a host sister, I knew that it’s much easier for them to bring only iPad with them everyday, you know that laptop is really very heavy!…

2 thoughts on “DukeEngage Students Use iPads to Provide Instruction to Middle School Students in Zhuhai, China”