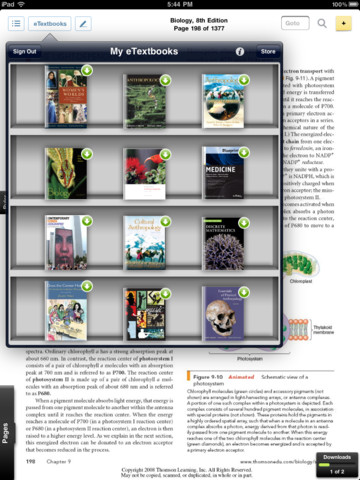 During the Fall 2011 semester, Dr. Cheryl Lin used iPads in conjunction with her Marketing Management course, encouraging students to use the digital version of the textbook. She also offered various teaching materials online in order to gauge how students might better exchange ideas and share notes.

Students who elected to use an iPad in the course downloaded the CourseSmart application, which provided access to an electronic version of the textbook used for the course.

In addition, Lin worked with an advertising agency to have students create a marketing campaign for a car recently reintroduced to the US market. She encouraged students to find ways to integrate and utilize the iPad in their promotional strategies, recognizing the fact that the tablet PC is becoming a mainstream media channel and communication tool.

In general, those students who used the iPad reported that they were very happy with the size and portability of the device, particularly when compared to the option of carrying a physical textbook to class. They also found the search feature of the CourseSmart application to be very useful; providing them the opportunity to search the entire e-textbook for words and phrases, rather than relying on a relatively limited index at the back of the printed book.  Students did frequently comment on a number of difficulties they encountered when trying to use the e-textbook in ways that they typically used printed textbooks.  For example, students found the process of note-taking to be very cumbersome, due both to the proprietary method built into their particular e-textbook interface, and the on-screen keyboard that is native to the iPad’s iOS interface.  Interestingly, several students specifically noted that they missed having an actual textbook for haptic or aesthetic reasons.  Additionally, some students mentioned that the device appeared to have few advantages over pen and paper when it came to taking notes during class lectures.

All-in-all, the general consensus among students was that the iPad was relatively useful as a supplemental educational tool, but it did not, for the most part, successfully replace the more established student standard combination of a paper textbook and laptop computer.

Listed below are a few selected comments from students that used the iPad in Dr. Lin’s course:

“The iPad’s main strong point lies in its convenience.  It is light, so leave it in my backpack and bring it everywhere with me, even when I don’t think I will need it.  This portability, combined with its fast start-up time, grants me access to almost immediate internet access for email, internet searches, etc.”

“The app makes navigating the textbook much more convenient, including a wonderful “search” tool that makes finding key terms much easier and faster.”

“When I had the iPad, I could use it for everything except for writing papers. Writing emails on the iPad was also a little tedious, but it was much more convenient to pull out the iPad instead of the computer. I loved to read on the iPad. Not just textbook reading, but reading PDFs and journal articles for other classes. I saved hundreds of pages of paper this semester with the iPad; instead of printing out all the readings I had to do for other classes, I read them on the iPad. It was also much easier to carry around so I was much more likely to get work done on the go. It was also a great presentation tool. Instead of having notecards I put the notes on the iPad and scrolled through them as I presented. In summary, the iPad was a timesaver, very convenient, and energy efficient.”

“I do not like reading the textbook online. It’s hard to take notes because you can’t place them right next to the paragraph that it pertains to. Highlighting is also frustrating. Studying is hard because you can’t quickly jump from page to page of a different chapter.”

“I don’t like the e-book because it’s too difficult to flip pages, go to different chapters, and I miss the feeling of holding the book in my hand. However the search terms are useful.”

Dr. Lin also aimed to determine if having the textbook and course materials available electronically would encourage students to spend more time reading and interacting with coursework.  Students revealed, in a survey administered at the end of the semester, that they didn’t spend an appreciably larger amount of time accessing course materials as a result of having an iPad.

Students also answered that a faculty member’s plans to use iPads as part of his/her curriculum would, for the most part, have little influence on whether or not they chose to enroll in a course.

Get Support for Teaching

Contact a Learning Innovation consultant or drop in at our office hours.