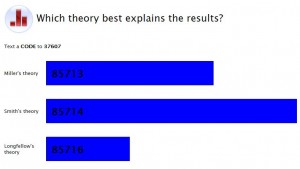 In an Introductory Psychology class, students were asked to compare three theories and select which theory offers the best explanation. Each student considers the question, then votes. The instructor shows the results; the class is more or less evenly divided. Students then turn to each other and compare theories, and the classroom is filled with the sound of learning as students discuss the three theories, using what they have just learned in class and testing their explanations with each other. In this imagined scenario, a question was projected onto the screen in the classroom, and students voted by text message, or using the web via their smart phones, or on the web with their laptops. Poll Everywhere gathered the responses and displayed them, spurring student discussion.

Poll Everywhere is a web-based alternative to “clickers” or student response systems. In some classes, students are required to purchase clickers in order to vote during class. With Poll Everywhere, students use whatever they have with them: a phone capable of sending text messages, or a smart phone or computer using wireless internet access.

The Duke Digital Initiative purchased licenses for several Duke faculty to use in their classes during the past academic year. What happened?

I am using Poll Everywhere this semester to assess understanding, facilitate discussion, and to demonstrate some psychological principles (having the students answer questions as ‘in class experiments’)

She used polling several times in each class, and concluded

STUDENTS LOVE IT!!! It makes them feel like an active participant, which is great in big classes.

I’ve used Poll Everywhere to assess students’ understanding, to conduct demonstrations, and to survey students’ opinions on topics ranging from silly to serious or controversial. The surveys can be a good lead-in to a topic, and in several cases I’ve used them to first see if our class ‘sample’ replicates some finding that’s already out there in the literature (we usually come pretty close!). I think I over-used the polls to assess understanding at first — was doing so once or twice every lecture — because as the novelty wore off, participation dropped to 50-60%. It’s higher on the surveys and demonstrations, and as I add more of those to the mix, I’m gradually building a repertoire of questions and activities that “work.” I figure that even those not participating get something out of the process, and I know that students like Poll Everywhere; it’s great to hear that buzz in the classroom when the results flash up on the screen. So there are lots of positives to Poll Everywhere: it helps to engage students and get them involved in the material, provides a change of gears, allows instant feedback to the instructor, and makes a very large class feel a little bit smaller. 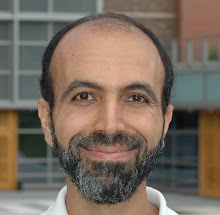 I love it! The student response from our midsemester surveys has been VERY positive about it, too. I would not use it for anything “required”, but it’s great for engaging the students and giving me as a professor a chance to really know what fraction of the class understand a topic. Best advice: 1) don’t expect 100%, 2) give enough time but not too much, and 3) always have an option in multiple choice questions of “I have no idea”.

Read more of his thoughts on teaching a large class at his blog, Science, Food, Etc.