“Our primary goal is to equip our students with a toolset that allows them to make the most of their time in the field,” said Read. “As calculation, graphing, and presentation-creation functions of the iPad are put to use in the field, so too is the ability for students to focus on mastering the more complex methods by which they are basing their research.”

Read worked closely with DGHI Educational Technology Consultant Marc Sperber and CIT’s Shawn Miller to plan for managing the setup and distribution of the devices, develop a set of exercises to test the iPad’s effectiveness for fieldwork, and collect and assess the project’s outcomes. Sperber and Miller recently presented the results of the project at the Eduause ELI 2011 conference in Washington, D.C. (Note, many of the following images come from slides included in that presentation).

DGHI contributed additional funding to bring the total number of iPads up to 12. In addition to iPads, Read and Sperber also purchased several small accessories to enhance the iPad’s functionality. 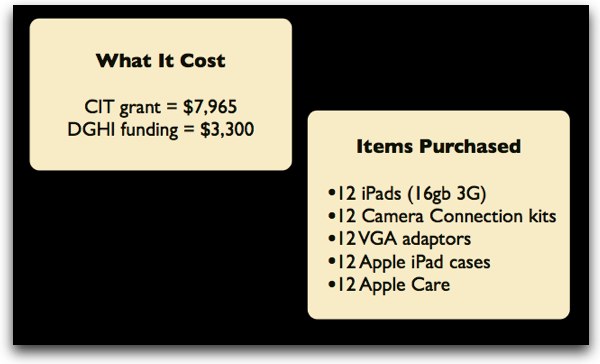 Without any previous models to guide them, the project team also had to devise a method for distributing the iPads in a way that would provide each student with an identical set of apps and settings. 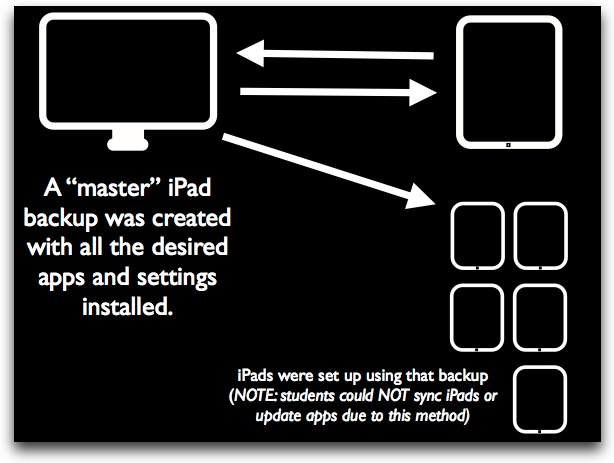 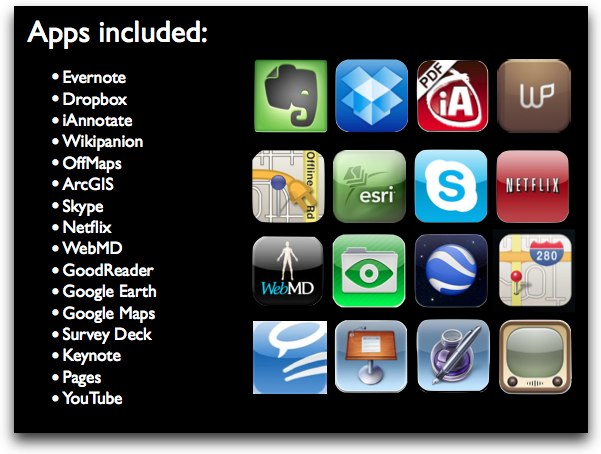 Apps included both those directly used for research and a small collection for entertainment, as students considered the iPad not only for research during their fieldwork experiences, but also as a device they could use to pass the time while traveling to their research sites.

Initial exercises provided an introduction to the iPad by asking students to perform short practical tasks, such as use the WebMD app to find a treatment for a particular condition, and access their choice of mapping applications to find the nearest hospital in their chosen region (which some students noted may still be somewhat inaccurate or even useless in developing countries). Students were also introduced to the basic uses of Evernote for writing and syncing text notes. 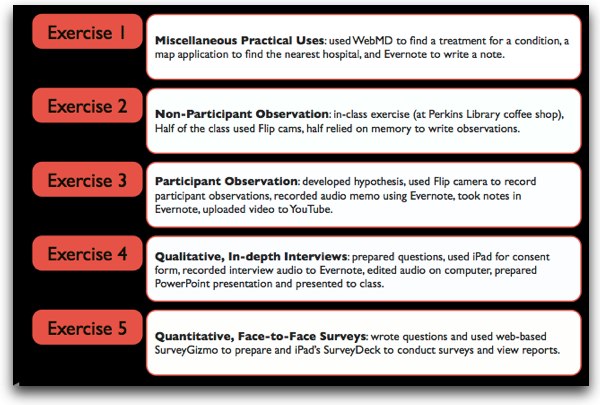 Several exercises involved using iPads for participant observation. Students used iPads to record audio memos and text notes, and Flip cameras to capture video as necessary. Students noted that the non-obtrusive, compact nature of the iPad made it easier to perform tasks such as “cloaked observation.”

Reads notes that the experiment also impacted her lectures:

“Various exercises that we used throughout the semester were combined with the lectures I had in place to teach about qualitative and quantitative methods, cultural sensitivity…it was an enlightening experiment for the students and for me. We learned a lot along the way.” 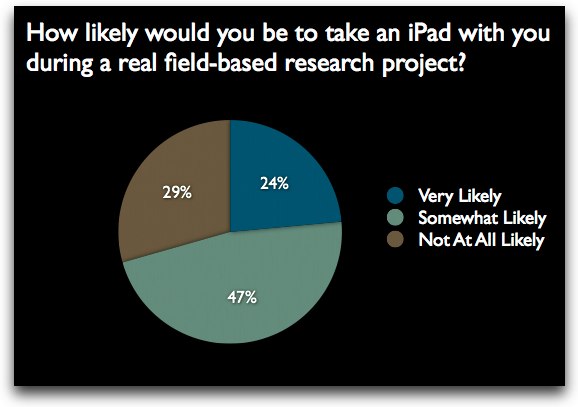 Surprisingly, a later follow-up question asked if students thought they’d purchase an iPad for themselves, after spending time  with one in the course. 82% of students responded ‘No’ – with reasons including: 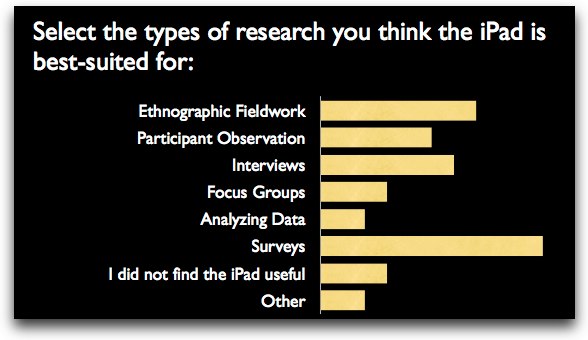 Though most students really looked forward to using the iPad for surveys (especially using them offline, and then uploading the data when back online), most of them found current survey tools lacking (as of Fall 2010). During follow-up focus groups, students suggested a need for survey tools that not only allow on-the-fly adjustment of the survey itself, but also the ability to give multiple people a survey simultaneously, yet securely (in the event of having enough iPads on hand). Students also expressed some doubts about the overall security of the device when using apps like Dropbox or collecting consent forms from research participants. 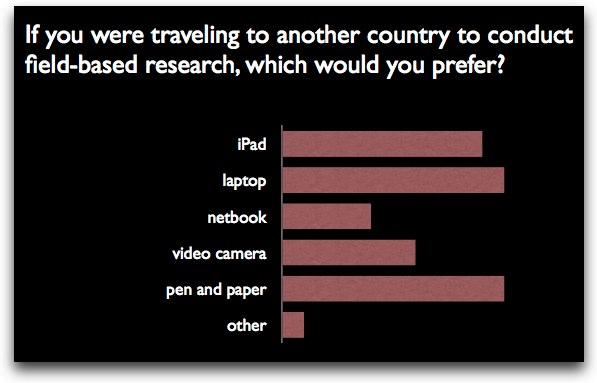 Some additional student comments on the above question included:

“iPad is the way to go. It is good for both a developed and developing country. It has a long battery life in case you don’t easily have access to power and can be used to locate people with the GPS service when you have internet on it.You can input data on the ipad but look less conspicuously like you are holding a computer, and hopefully keep the participants more comfortable.”

“The lack of programs like ArcGIS, STATA, and such make it difficult to just bring an iPad alone. However the iPad is a lot easier to take notes and interview with than an netbook.”

“iPad would be useful in a field setting that is more developed, and i would be wiling to consider using it in place of a laptop if there were ways to look at data as it arose.” 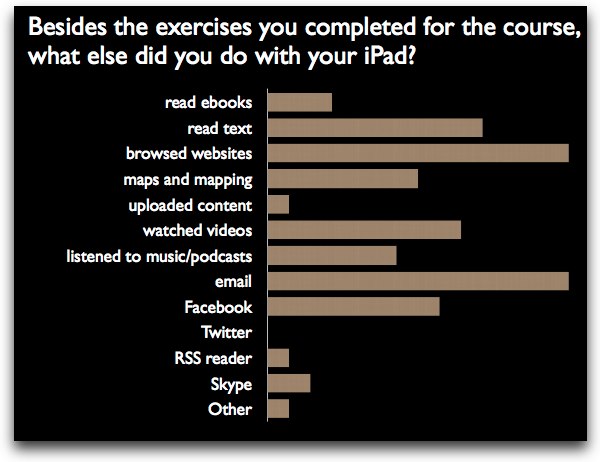 In addition to the above, students in focus groups reported spending most of their time with the iPad reading, recording audio (for assignments), and using Evernote to complete various tasks. 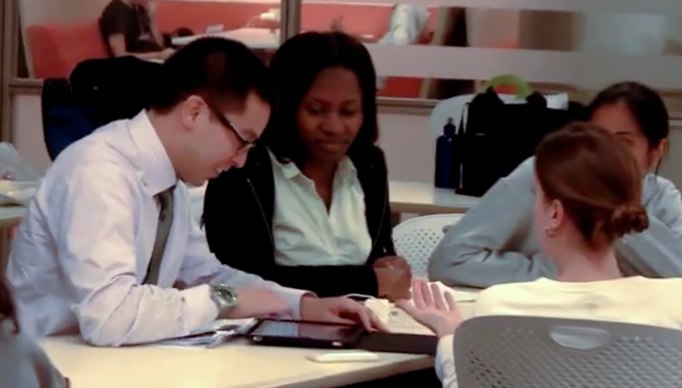 Looking forward to Fall 2011, the project team is considering the following changes to future courses:

A few articles that mention this project: