Skip to content
HomeBlogUsing the iPad to edit and annotate documents

This semester, my Advanced Grammar and Writing students in FR 101 and I experimented with how the iPad can help us become better writers – in French!

Throughout the semester, I used an app called iAnnotate to correct preliminary versions of student compositions.  Using a simple color-coded system of annotations that we agreed upon—incorrect verb tenses were coded yellow, for instance—I hoped to facilitate and improve feedback in a writing (and grading)-intensive course.  The portability and simplicity of the iPad were ideal for these corrections.  Armed with a stylus, I could retreat to my favorite spot and simply highlight areas that needed work.  Next, I sent the corrected PDF files to students by email, where they received a clear visual analysis of which areas most needed work (Lots of blue? I must need to check gender agreement more often!).  Over the course of the semester, students could look over their 6 corrected compositions to see in which areas they had made improvement and also where they needed to focus their study to review for the final.

Initially, students found it challenging to revise their papers based on a PDF.  Without a color printer, they had to work online, toggling back and forth between documents; when they did have a printer, the comments wouldn’t print out on the paper itself, but rather appeared in the text of the email sent with the PDF.  Still, they preferred this to my handwritten comments.

From the faculty side, I struggled with the onscreen keyboard.  Keying in accents was somewhat clunky, so it took an additional effort to give feedback, and while I eventually got used to it, I found that I was inclined to type fewer comments about a paper’s content.  In the future, I would like to try recording comments and sending these to students with a copy of the color-coded paper.

Perhaps more successful were our efforts to annotate texts in class.  During the weeks that we worked on literary texts, Meghan Kennedy, the CIT project lead, brought in a stack of iPads for our class.  Since she had already loaded them with the text we planned to analyze, students were able to get to work right away, using prompts to break down the text and access its deeper meanings (see screen shot below).  After this focused pair work, students gave short presentations to the class by projecting their annotated texts on the classroom screen.  Through multiple, brief presentations that flowed seamlessly, students learned different ways to present texts and learned varied approaches to textual analysis from their peers.  Our classroom seemed less teacher-centered, and I was able to gauge student learning better.

Would I try it again?  By all means! 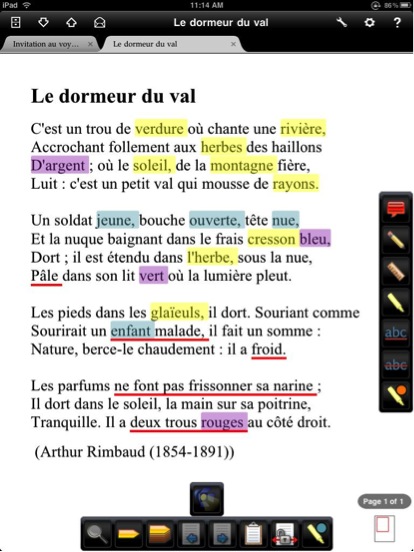