Are you involved with 3d modeling projects in courses?  Do you have students doing video projects that might be interested in developing a stereoscopic (3d) video? 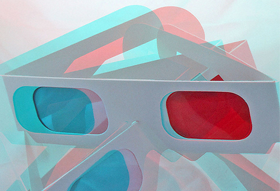 This year, one of the areas being investigated by the Duke Digital Initiative is 3d video.  There are two components to the investigation.  We’re looking at the new 3d televisions and seeing if those might be used by faculty to display content to small groups from 3d rendering software, such as Maya or other software.

The other component is an investigation of 3d video cameras and camcorders that are being released and determining if there would be an interest in using this type of equipment for student video projects.  There are two types of cameras – some that are more like Flip cams with two lenses that shoot in 3d and high definition camcorders that shoot in the format.

We’re curious if a consumer 3d display in the Link might be useful for faculty having classes there and if it would be technically feasible to output to the display from a 3d program like Maya or some type of software for viewing models.  The idea is to make it easier for faculty who might not create 3d models as a major component of their work to still use existing 3d models or models they’ve developed with others on campus in a discussion or in-class activity.

For the 3d video component, we’re investigating if there would be interest in shooting 3d video projects that might be used with a 3d display in the Link or output for use in 3d on sites like YouTube, which an allow for viewing in various 3d formats from a single source:

We’re trying to gauge the interest in 3d displays and video by mid October and gather information on technical feasibility of a pilot project for spring.  If you would like to contribute your thoughts and ideas, please contact the DDI co-leads for DDI’s 3d investigation.