Back in December, I posted a comparison of five different models of microprojectors. At the time, the Optoma Pico PK-101 was almost the most impressive; its main drawback was the tiny problem of not connecting to laptops (VGA).

Not long after we purchased our exploratory pool, Optoma released the Pico PK-102 which does connect to VGA. We just got one of these for CIT use, and I am blown away by this little marvel. Like the PK-101, it has a rechargeable battery so it can be used where there is no access to an electrical outlet, and it has an optional iPhone cable which is small and sleek. But the new model, in addition to being able to connect to VGA, has 4 GB of internal flash storage, so properly pre-loaded with files, you could walk into a room with nothing but the tiny projector itself and give a presentation.

To show video files using the internal storage, you do need to use the built-in software to encode the video into the AVI format that the projector requires. This is quite simple to do. You don’t need to do anything special for picture files – just connect the PK-102 to your computer with the USB cable and drag and drop your JPEGs into the projector.

The PK-102 is estimated to operate for 20,000 hours before it burns out and costs about $250. That’s about half the price of a replacement bulb for a standard projector, which tend to burn out after 2000 to 3000 hours of use. The PK-102 is far more energy efficient as well, using cool-to-the-touch LED light technology rather than a burning filament bulb.

Granted, a pocket projector is no replacement for a standard projector in a large room or where ambient light can’t be managed. However, if you’ve got $250 and could use a projector that’s roughly the same size as your cell phone, the PK-102 is the thing you want to consider. 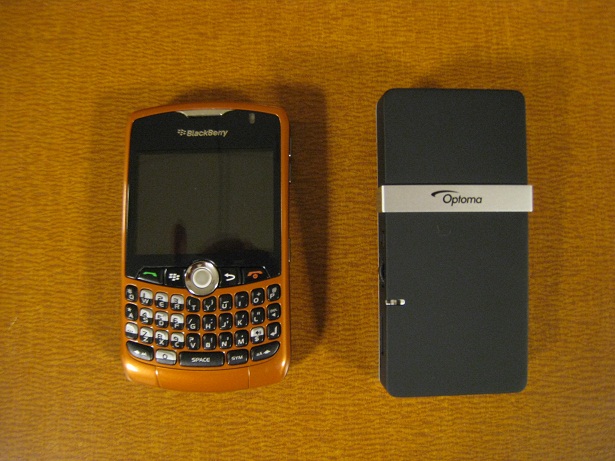