Laura Florand was one of fourteen faculty who, together with graduate student Brenna Heitzman, participated in a Spring 2010 CIT Fellowship for language faculty interested in exploring with colleagues the most effective and most efficient ways to increase students’ oral production in the target language, in order to increase students’ language learning.

In addition, they felt that emphasis on student-to-student (as opposed to student-instructor) communication made assignments more meaningful.  This could also mean that less of the “meaning” given to the assignment came from the grade it received or teacher feedback, which could lessen the overall responsibility on the part of the instructor for extensive and time-consuming feedback and assessment.

In their Fellowship experience, Florand and Heitzman aimed to design meaningful course assignments using VoiceThread, a tool which allows collaboration around images and other media, which would encourage student-to-student communication outside of their French 76 classroom. As a corollary, they planned to use student self-assessment to involve students in reflection on their oral progress, on strengths, weaknesses, and what they themselves can do to improve, thereby increasing student awareness of what different oral production assignments are accomplishing (and ideally increasing their meaning or value to students), and also increasing student self-efficacy.

Below, two sample screenshots show one of the class VoiceThreads. 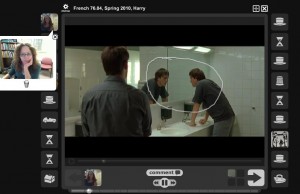 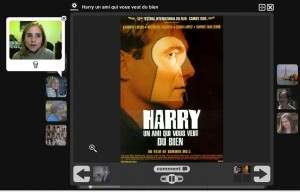 Avenues to purse in the future:

They found that VoiceThread lends itself to a variety of methods to enhance student language production.  Some ideas include: