Skip to content
HomeBlogCIT Showcase 2010: Practicing what we preach

When it comes to using technology, CIT tries to ‘practice what we preach’ – and our annual Showcase event is no different. In fact, the Showcase gives us an opportunity to try out new and/or experimental technologies in a higher stakes, more immediate way. We won’t lie – sometimes these experiments fall flat or just plain fail…but sometimes the technologies come together in really amazing ways.

Planning and scheduling a conference can be a nightmare. How do you collect information and input from 14-15 individuals? We chose to do most of this using Google Docs. I’ve included a screen-capture of the Showcase schedule as ‘work in progress’ below. Google Docs allowed everyone involved to access the same document and make changes whenever and wherever they liked. It’s not always pretty – but the simplicity, flexibility, and accessibility of Google Docs far outweighed other options (like saving and sending a new ‘version’ of a traditional document or spreadsheet). 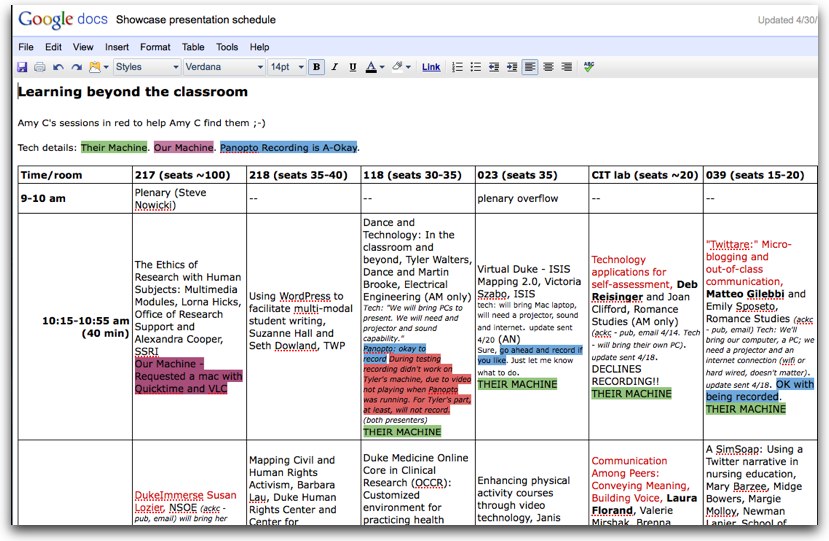 CIT has published the Showcase schedule, program and more as a website since 2001. We actually maintain an archive of these old Showcase sites. From 2001-2007, we created these websites with a combination of hand-coding, tools like Dreamweaver, and any other traditional web-design tool available. In 2008, we started experimenting with WordPress.

WordPress first became popular as a blogging tool – but has since expanded into something more flexible and powerful. Our first attempt with using WordPress to publish a conference site (in 2008) turned out so well that by our 2009 Showcase, we knew that we’d want to use it again. This time, however, we decided to really take advantage of what WordPress had to offer: using tags to allow people to search by conference themes, using ‘categories’ to group sessions by times and locations, and using ‘widgets’ to add new Web2.0 tools like Flickr and Twitter to our conference site. Now, in 2010, we know enough about using WordPress to create a more dynamic conference website with content that could be updated by CIT staff as soon as it needed to be (no more waiting for a web designer to do it). 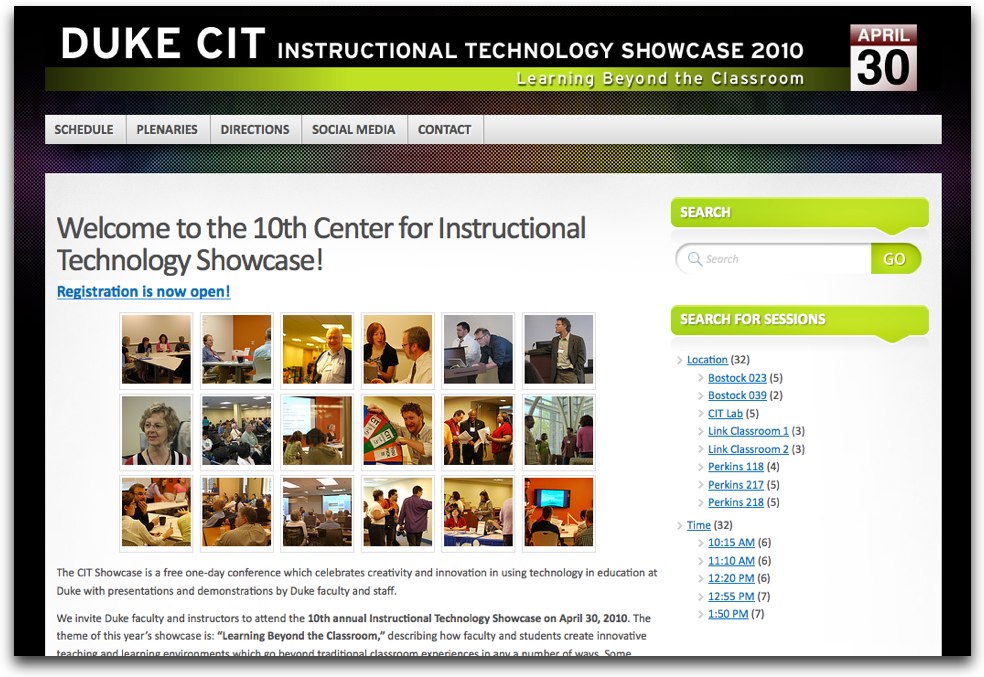 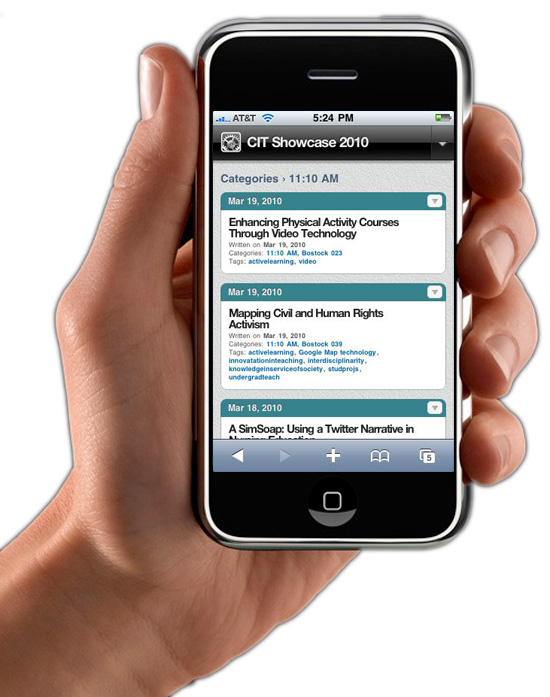 We also wanted to take advantage of a WordPress ‘plugin’ called WPtouch. WPtouch makes it easy to configure a mobile version of a normal WordPress site. After tweaking a few settings and testing on a few devices, we now had an instantly accessible mobile version of our Showcase website. Showcase attendees with an iPhone, a Blackberry or other such devices could search for sessions and read abstracts of upcoming sessions right from their device.

We continued our use of Flickr for uploading and sharing photos this year. Here’s a link to the current Showcase 2010 collection (each tagged with dukecitshowcase2010).

We also collaborated with OIT to try out a new recording application called CourseCast, created by a company called Panopto. CourseCast provides an easy way to record a presenter’s voice, plus anything displayed on the presenter’s laptop, and share it afterwards. You can see CourseCast recordings of several of our Showcase sessions on the Showcase schedule page. More information about CourseCast will be available this fall. 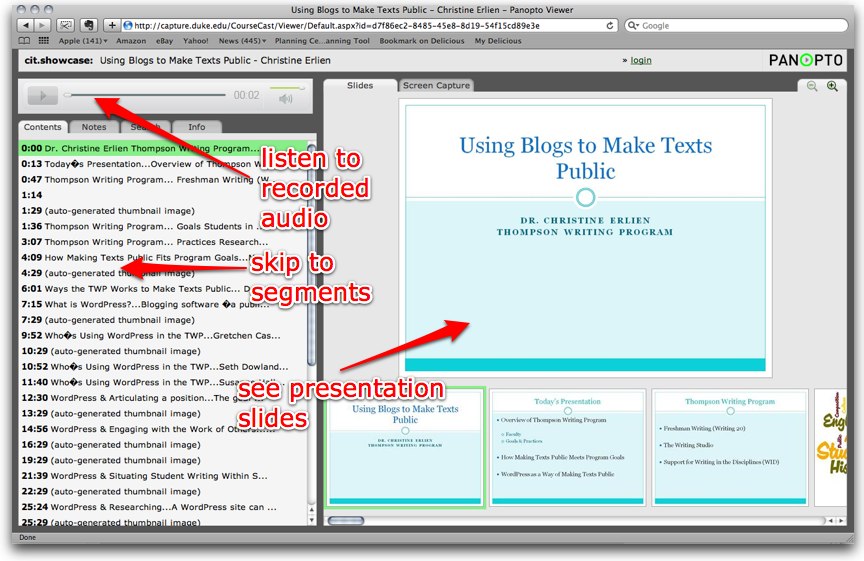 We also captured some sessions of Flip video cameras. Check CIT’s YouTube account for more videos from the Showcase as we add them, or just visit our schedule page on the Showcase website.

Finally – what would a conference in 2010 be like without Twitter? Love it or hate it, we continue to find Twitter useful to advertise for the Showcase, to provide quick updates about the event, and most importantly, as a way to provide an extra layer of conversation (called the ‘backchannel’) to our event.

For attendees who never accessed Twitter, or who just wanted to eavesdrop on the conversation, we set up a large flatscreen running a small application called Twittercamp (see image below) next to our Sticker Bar. This application displayed every tweet that included our conference tag (#cit2010).

Still not sure about this Twitter thing? Here’s the main benefit of having a Twitter backchannel at a conference: you can archive the entire Twitter feed from the event. In some ways, it’s like having crowdsourcing notes for your entire event. You can read the  Twitter feed from the CIT Showcase 2010 here or download it as a PDF. Quick word of advice for those new to this – start reading from the end (from bottom to top). The most recent tweets will be first…

As always, let CIT know if you’d like to discuss any of these technologies. We’d love to share any of our experience(s) with you.

1 thought on “CIT Showcase 2010: Practicing what we preach”