The conference: the meta-experience

ANDREA: ELI is attended by people who are excited about using technology in teaching. The attendees (faculty, learning center folks, instructional technologists) may also be excited about technology in general, but the focus is on the possibilities that technology provides for education.  The organizers and attendees are the sort of people who are willing to try things to find out what works. Therefore, there are many experiments at this conference: types of sessions, varieties of activities, and how people learn at the conference (which is the most interesting to me). It’s like being able to see into the future, or, even better, getting to play in the future.

There are hands-on sessions, round table discussions, activities with name tags (see below), post it notes used to gather information (think-stops), a conference-wide alternative reality game, faculty innovation showcase with demonstrations, online social networks, citizen journalists, and twitter. The individual sessions range from demonstrating rubrics for grading online discussions, to using mobile devices to teach, to learning space design, to how to best help faculty, to using gaming in teaching and learning. And more.

SHAWN: The ELI conference planners practice what they preach. To better illustrate the rapidly expanding role of social networking in education, they provided a Twitter feed, instructions for tagging media and posts on the web (EDUCAUSE_ELIAnnual09 or simply eli2009), and even a way to physically add ‘tags’ to one’s conference badge. 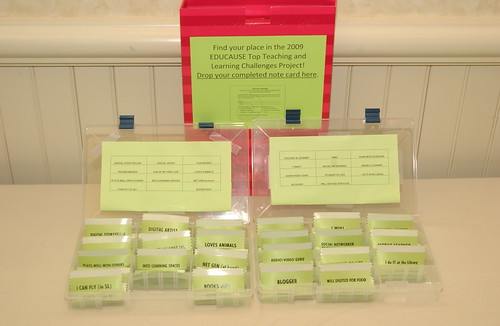 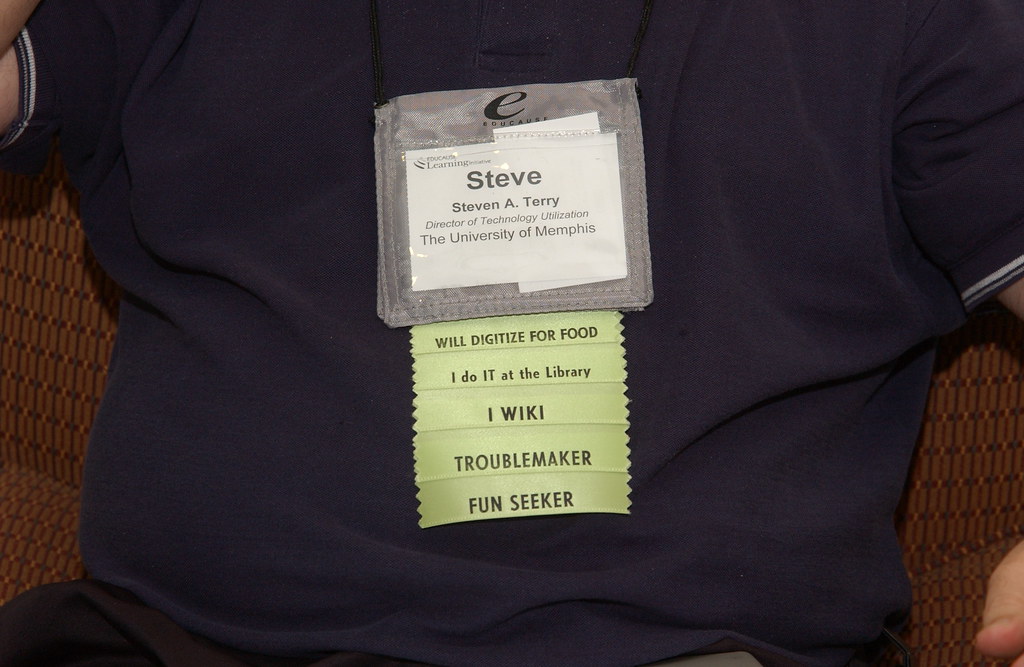 ANDREA: I’m most interested in watching how people chose to learn at this conference. The featured speakers, interestingly, lecture with PowerPoint (and it’s a tough crowd for PowerPoint – people critique the design before listening to the speaker).  So, at first glance, it looks like it’s the same old lecture format. It’s not.  Many of the participants are actively twittering or at least watching the twitter stream. This back channel communication is an important part of the conference. I took notes the old fashioned way, by typing on my computer and fighting for space at electrical outlets between sessions, but I also watched the twitter channel throughout the conference.

Note that the twitter stream contains tweets from several different sessions, all mixed together. I could watch tweets from my sessions as well as those from the other sessions simultaneously. Some people used twitter to take notes on the main take-homes from the session. Some people who were the sessions I was attending were tweeting really good, concise notes – I either copied their tweets or noted their names in my notes, and could think about their ideas at the same time I was thinking about mine.  Instead of being distracting, the twitter stream helped me focus on the session I was in. Other people would tweet additional information, as a supplement to what the presenters were saying, and sometimes included URLs for more information. People (like Shawn) who were prolific twitters seemed to be using hand-held devices (like the iPhone) rather than computers.

SHAWN: Attendees used Twitter to rapidly share notes and thoughts during sessions. These tweets could be read and replied to by other conference attendees – or by anyone following any of the attendees Twitter streams.

Here’s an example of the way this works. During a session I would post notes or thoughts about a session to Twitter via my iPhone (using an app called Tweetie). Every time I would post, I would also add the hashtag #ElI09 to my post. 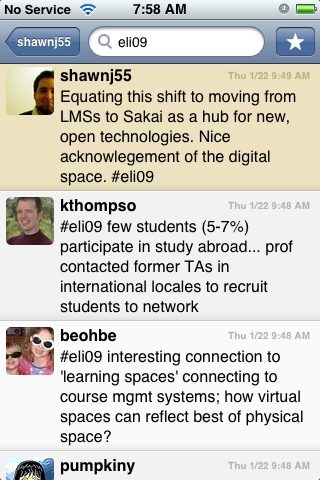 Twitter also supports a way to ‘favorite’ Tweets that you might want to save outside of the Twitter stream. I found it useful to ‘favorite’ any tweets (including my own) that I might want to use later, or view as notes. I ended up with eleven pages of ‘favorites’ that formed the basis for all my conference notes, links, and other things I wanted to remember.

ANDREA: I could also see what was going on in other concurrent sessions – and could ask questions about that session even if I wasn’t in the session, by sending a direct message to someone in the session.  I learned more about things that I couldn’t attend this way, and then was able to more fully participate in conversations after the sessions.

Some people used twitter to take notes.  Shawn was tweeting prolifically (see above), and he “favorited” his and other tweets as his notes.  I think this works if you were there in the first place for context.

SHAWN: The Twitter feed was also displayed in various places throughout the conference, so others could a) better see and understand what Twitter is and does, and b) just get an ‘ambient’ understanding of what’s currently going on. 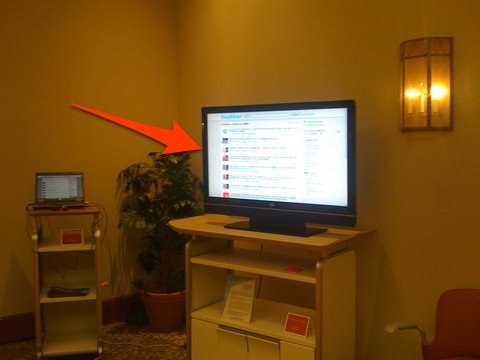 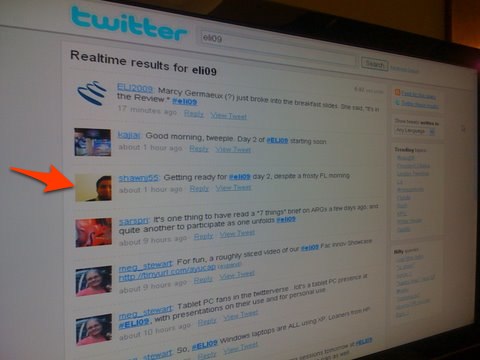 ANDREA:  What were the main themes? Here’s the twitter tag cloud:

The other observation about the conference as a whole is that it seems the consensus is that social learning is how to learn.  This was an underlying theme that supported most if not all of the sessions.  In fact, it seemed as though some activities tried to take ways of doing things from online social networking tools and bring them into the classroom.  Social construction of knowledge was crucial to the design of the conference and the individual presentations within the conference..

Theme: blogging as an open platform

SHAWN: Building on what Andrea wrote above (social networking and social learning), it seemed that the more substantial themes of the conference aligned quite nicely with the 2009 NMC Horizon Report, which premiered at the conference as well. I’ve been writing a series of blog posts about this, called ‘Getting Personal’ – where I’m working with the idea that personal technologies (blogs, social networks, mobile devices) can be leveraged to become powerful learning technologies. My first post detailed a presentation regarding blogging:

For this first post, I’m specifically interested in addressing these “easy-to-use publishing tools.” Perhaps this is the best example of what a ‘blog’ really is. For many of us, we tend to think of blogs as a web-based journaling device, or maybe as a way to keep an online diary of the daily adventures of our cat. Others have come to recognize the power of easy self-publishing, and we now, as a culture, are much more aware of folks who are ‘bloggers.’ No doubt the term ‘blogger’ carries several political and cultural connotations in recent years that has perhaps cast even some negative views on the idea of a blog itself. But the blog, the tool itself, is really a powerful tool for bringing text, photos, video and other multimedia together into a form that feels more presentable and ‘published’ than simply the sum of those parts alone.

In a recent presentation at the annual EDUCAUSE Learning Initiative conference, Jim Groom (UMW), Alan Levine (NMC), and Cole Camplese (PSU) explored the idea that the blog could be much more than just “a blog.” All three gentlemen co-created a blog just for the presentation, and gave each piece of their presentation via the same blog (in lieu of yet another PowerPoint): Eli2009.wordpress.com.

Read more of this blog post here: Getting Personal (part 1): When blogs are more than blogs

SHAWN: My second public blog post in this series also used info from ELI2009. This time from Michael Wesch’s presentation. Wesch is ‘famous’ (in instructional technology circles, anyway) for several things, but primarily for his impressive use of social networking tools (YouTube, wikis, blogs, diigo, delicious, Netvibes, etc) for his courses.

Read more of this blog post here: Getting Personal (part 2): Michael Wesch and the ‘Just in Time’ personal web

SHAWN: This year, I didn’t take a laptop with me. I sent emails, wrote notes, took photos and used Twitter – all through the iPhone. I managed more battery life than my laptop (close to 7 hours one day – my laptop only gets 1.5 hrs at best these days), and a much more comfortable experience overall. No doubt using Twitter (see above) helped quite a bit – as I didn’t have to ‘thumb-type’ all my notes – I could just collect them off of Twitter, but I still managed to do quite a bit more with my phone than most folks did with their laptops at the conference (ex: it’s difficult to take photos with your laptop or type a note while standing around having coffee).

In a forthcoming blog post (Getting Personal – part 3…coming soon!), I’m going to try to tackle what some of the new mobile technologies may mean for educators. At ELI2009, we heard more about the Kindle, about geolocation, and about mobile devices in general than I’ve heard at any previous conference. I also noticed more folks using mobile devices and netbooks.

“At the 2009 Annual Meeting, attendees were plunged into the world of alternate reality gaming by a common challenge: to save Professor Rufus Bluth, a marine biologist whose controversial research into pink salmon populations put him in the crosshairs of a local petroleum company.

Attendees were first introduced to Professor Bluth during a video interruption at the opening general session. A hidden URL led to Bluth’s research site, which included a series of hidden clues and puzzles to find his research. Clues throughout the meeting space helped fill in the details behind Bluth’s findings, his pursuers, and his “story.””

A group of conference planners devised the story, the setup, and created a few basic video clips and websites. Then, they sat back and watched attendees try to ‘save Bluth’. Clues would also appear on conference tables, hidden on the walls, or even in the restrooms. 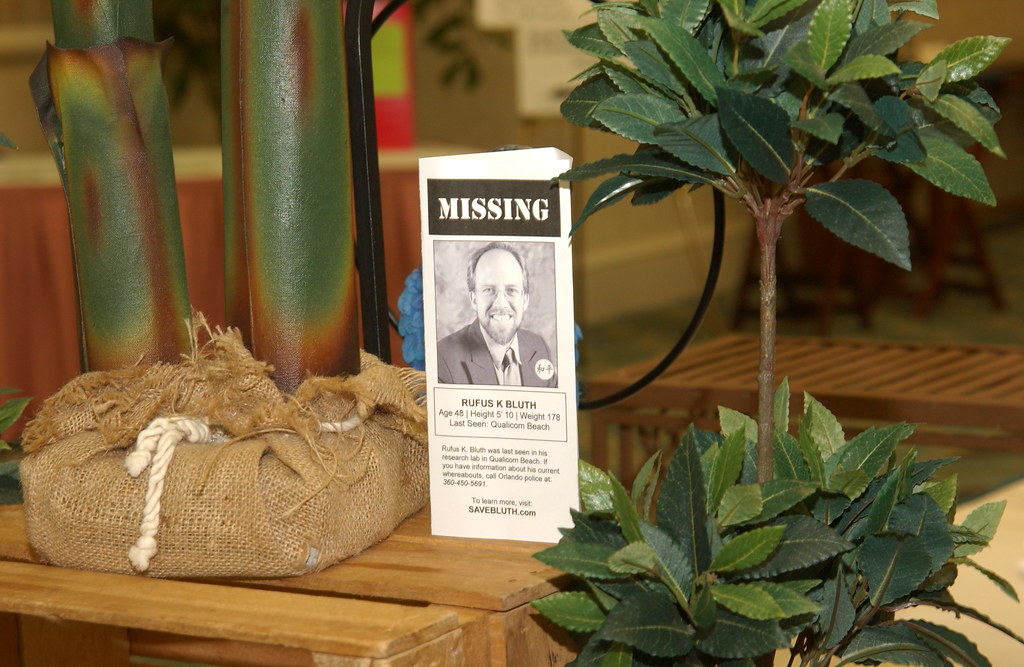 Some of the clues used QR-Codes (sort of like bar codes) that basically hide a URL. The only way to get to the URL is to take a photo using an application such as BeeTagg, which then decodes the image and returns the website. 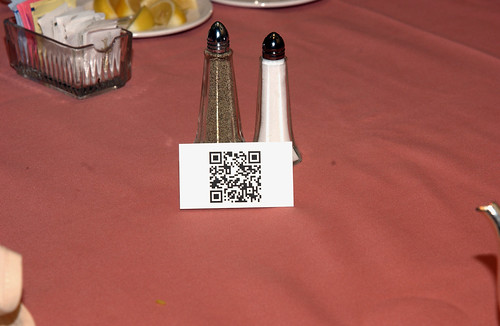 Some attendees created a wiki to keep track of clues and then got the info out about the wiki in much the same way we were getting clues about Bluth. 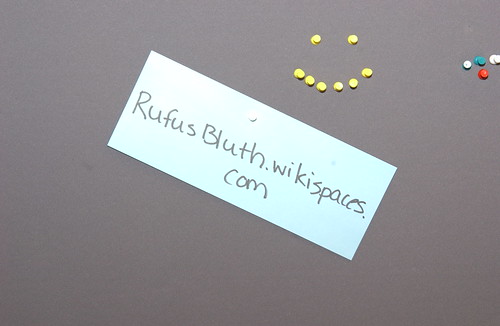 Planners also provided a webcast presentation a few weeks after the conference, where they fully ‘unpacked’ the entire process that went into setting up the ARG.