Skip to content
HomeBlogRethinking Teaching in the Link: Guest blog by Caroline Bruzelius

This semester, Duke opened a new flexible teaching and learning space in Perkins Library, called the Link. The Link supports student and faculty learning, teaching, and collaboration by offering several flexible, multimedia capable classrooms in addition to many informal meeting rooms and break-out spaces that encourage group and student engagement.

As part of what will hopefully become a continuing trend, CIT will begin posting faculty-written reflections of their experiences teaching in the Link. Following, is the first of a series of posts from Caroline Bruzelius, Anne M. Cogan Professor of Art and Art History. 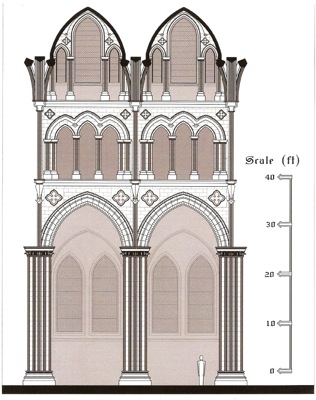 One of the courses I teach at Duke is called “Gothic Cathedrals.” Since many of the students are from the Sciences and Engineering, long ago I decided that asking them to write the traditional research paper was not going to work very well, since most of the sources are in various European languages. Instead, I organized the class into teams of three, and each team would design a fictional Gothic Cathedral and write a “history” of the site  – a history that would include the Christianization of the town and the saint or relics to whom the cathedral would be dedicated, and provide a ground plan, section, elevation, and façade for this fictional building, as well as its full complement of stained-glass windows and portal sculpture. In order to get the students really engaged, I plug in a competitive element: at the end of term each projects is presented to a jury and we give prizes for the best projects.

A few years ago it occurred to me that we could teach the cathedral “architects” a computer-aided design program, so we began to train them on Autocad.  This meant we began to get really professional-looking designs, like that of Charles Sparkman, Trinity ’09 (see image).

But the Autocad training took place in another building, and remained detached from the rest of the class, 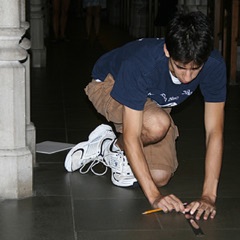 which meant that the groups were not working closely together. We really needed the projects to be developed by the whole team, each part fitting together like a glove. Getting the different members of the group close together and working like a team has been a long-term dream for this course.

When I heard last year about the Link, a space that was going to have state-of-the- art technology and classrooms where we could cluster the groups in different ways, I leapt at the chance to teach there. The Link means that sometimes we can have presentations from reference librarians right downstairs from all the terrific resources in Perkins.  We can run upstairs to the second floor to consult geographical maps (for example, looking for sources of limestone and forests). We could borrow books on medieval trade and markets from the reference section on the first floor. Meanwhile, our “architects” are working on Autocad in a room right next to where the “bishops” and “iconographers” are inventing their fictional histories of the sites.  If we need to think about coinage, we can “Google up” sources on medieval money or go back to the Reference sources on the first floor of Perkins.

A lot of this class involves getting students to think about space –  after all, we spend our entire lives in, and around, buildings, but how often do we actually think about them?  So I train the class to draw ground plans, and we use the Duke Chapel as our laboratory for this. 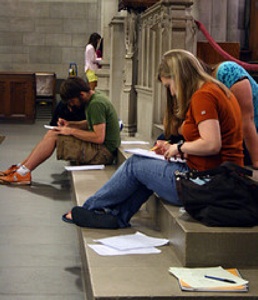 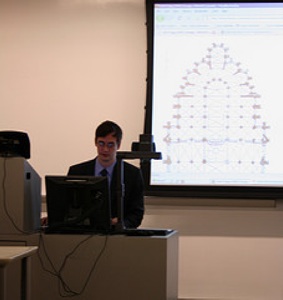 (NOTE: he doesn’t always wear a tie  – but he was going to a meeting with the Trustees that day).

…while the rest of us are across the hallway in Classroom 3, working on the history and decoration of the buildings: 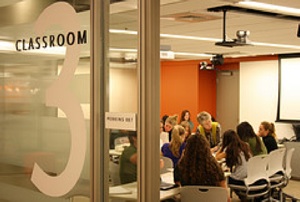 At this point (October 22, 2008), we’re just beginning to get the outlines of the fictional histories and the geographical locations underway.  From now until the end of the term, the TA’s and I work with each group refining the concept, inventing the history, constructing the cathedrals… We’ll keep you posted as they begin to take shape. 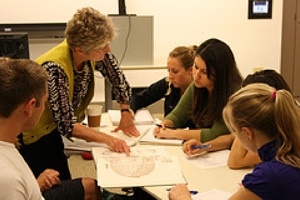