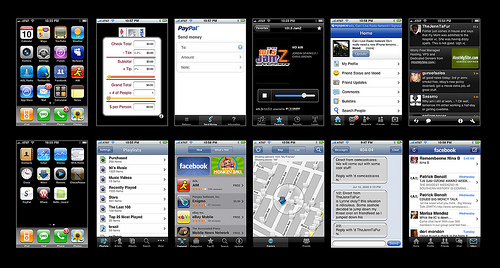 The big news today is that Apple’s 3G iPhone is finally available to purchase. What’s the big deal? If you need to know, here’s a handy ‘review matrix’ from Gizmodo that should help bring you up to speed.

While that’s just great, what about folks that have already bought an iPhone, or have an iPod Touch? What do we get? We get version 2.0 of the operating software, which gives us the Apple-sanctioned ability to install ‘apps’.

I’ve been waiting for opportunity to try out some 3rd party applications for a long, long time. At launch (available in the newest version of iTunes), there’s supposedly over 500 new applications available. I’ve downloaded or tried about thirty so far. Instead of provided a play by play on all the ‘apps’, I’m going to just hit on some of the overall themes or apps that I think might end up being useful for higher ed more specifically.

Voice Recording: This one is for the iPhone only (since the iPod Touch doesn’t have a microphone built into it). Given one of the iPhone’s functions (er…its a phone!), it makes sense to have a few applications that take advantage of the its built in microphone and provide us with voice recording capabilities (yes – shockingly missing from the original iPhone software).

Social Networking: Facebook, MySpace, Twitter, Flickr and others are represented so far. Facebook’s app works pretty much just like their iPhone-specific web page application. The MySpace app is actually nicer than MySpace itself has ever been. There are also several Twitter apps, though none officially from Twitter itself. Ultimately, I still find using the Twitter iPhone web page easier than waiting for one of these apps to load up, but they’re definitely a step into a quickly emerging world that finds it less and less necessary to be tied to desktop and laptop computers to maintain connectivity and information.

Language Tools: Aside from standard translation dictionaries, there are already some neat language apps (some free, some costing $10 or more) that include access to libraries of short, spoken phrases in a given language. The iPhone finally gets some flashcard apps too.

E-Books: The iPhone can also now load eBooks in a variety of formats. Several ‘classic’ books and general eBook readers were available at launch. While I doubt it will kill sales of the Kindle, it certainly seems promising. Still, some folks might have reservations about paying $0.99 for Anna Karenina, when its been available for free on Project Gutenberg for years.

Location-aware Photos: I’m still exploring this feature, but the iPhone appears to be trying to geotag my photos now. There are already a few apps that try to take advantage of this, either by tagging your location and adding it to a social networking site, or by providing you with links to other photos from the same area. Ex: If I’m standing in front of the Duke chapel and take a picture with a specific app, I can also see pictures of the chapel (or the area around the chapel) on sites like Panaramio. It feels like this is just scratching the surface of what’s possible. Exciting, and worth mentioning.

Blogging and Productivity: A few apps try to provide sets of tools for blogging. Six Apart has already released one that helps the user quickly upload pictures and manage text on their TypePad blog. and it’ll be interesting to see if the other major blogs (Blogger and WordPress) follow suit. For those who don’t blog, but want to capture pictures, text and even audio notes, the productivity app from Evernote may prove to be very, very useful.

Science and Math: Believe it or not, there are already some science and math apps. For $10, users can try ‘Atom in a Box‘, which is supposedly an ‘aid for visualizing the Hydrogenic atomic orbitals’, or users can look at 3D Molecules for free. The math apps are still lacking a bit, but there are some nifty advanced calculators (though the new iPhone update gives us a scientific calculator built-in!) and some flash-card style math training games.

Other things of interest: There are so many of the apps, that its somewhat overwhelming to even think about getting around to trying most of them. Apple even built one – an app that turns your iPhone into a ‘remote control’ for iTunes and/or the Apple TV. Users can then use the iPhone to sort, search and play their iTunes libraries – the only tether is the area of your wireless connection. Still missing: video apps (we know they exist!) and more advanced, Skype-like conferencing apps for starters.

Something I’ve noticed going through these apps and playing with each: there seems to be several different philosophies just what an ‘app’ should be. Some developers see the iPhone as ‘just another cell phone, but with a big touch screen’, and have basically developed applications that run like old Java-based cell phone applications. You have to wait for the app to ‘start up’, and it sluggishly works. Other developers approached the development by just creating iPhone-ish ‘wrappers’ for their webpages. In other words, though it looks sort of like a built-in application, what you’re actually using is a webpage in a slightly glossier container. Somewhere between both of these worlds is the Apple-esque ‘widget’ philosophy – meaning small applications that do one or two very specific tasks well, and that’s that. Anyone who’s spent a few minutes playing with Apple’s built in, very simple, weather or ‘stock market’ widgets knows the joys of quickly accessing web data with a snappy little application – yet never going to a ‘webpage’ or feeling like you’re waiting for the web to load up. It’ll be interesting to see how all of this pans out as more and more reviews of the apps become available.

For more summaries and short reviews of the new applications: