Google Earth has updated its images for North Carolina (and many other places) on October 23, 2007. Bostock library is now visible in Google Earth (but not yet in Google Maps)! Below,  I’ve embedded the Google Map above an image from Google Earth. Do you see what’s missing in the map?    Google Maps images of Duke were updated less than a week after Google Earth; now the images are the same.

There have been updates to other areas – Crater Lake in Oregon is an even better demonstration of the terrrain in 3D.

There are new tutorials for Google Earth to show you how to publish the same material in both Google Earth and Google Maps, including videos in your materials.

Here’s a PowerPoint presentation on including Google Maps in your website. And a tutorial. (But, it’s pretty easy – you can go to Google Maps, click “link to this page” and follow the directions. )

Frank Taylor, on his Google Earth Blog, points to several sources of images and mapping tools for the California fires. 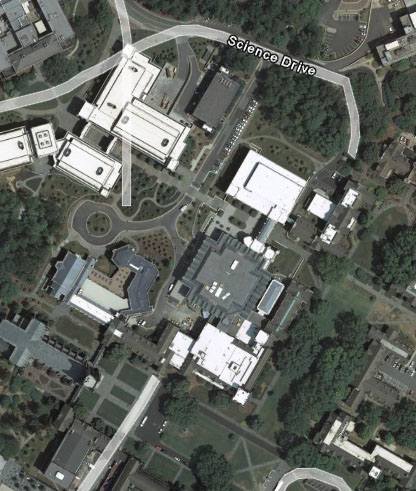