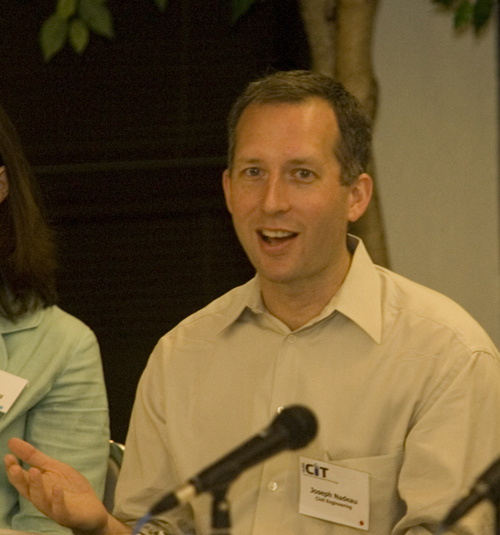 Dr. Nadeau participated in a year-long faculty fellowship organized by Dr. Lisa Huettel to experiment with using tablet PCs in teaching. He taught CE133L, Concrete and Composite Structures using a tablet PC.  To prepare, he converted his handwritten materials provided to his class to PowerPoint. These materials are annotated with a tablet PC in class as he lectured. Recreating his materials for the students afforded him the opportunity to rethink the organization of these materials resulting in more efficient, effective presentations. After the course, the majority of students preferred lectures when he used the tablet PC rather than the chalkboard. Dr. Nadeau believes this is due to the use of color, a larger image for increased visibility, and better contrast between his writing and the background.  Although he misses the feeling of writing with chalk, there were too many benefits in using a Tablet PC to not make the switch in all his courses.

Using the Tablet PC in place of an overhead projector and blackboard permitted me to:

Several semesters following his fellowship, Dr. Nadeau noted that having PowerPoint slides for his class materials has made it significantly easier to modify materials for subsequent offerings of his courses and he now has electronic backups for his course materials, which he had not had previously.

The photo is of Dr. Nadeau discussing his experience at the 2007 Center for Instructional Technology showcase.