Using iPods in the Electrical and Computer Engineering class “Fundamentals of Digital Signal Processing” had a two-part purpose: collecting and analyzing pulse rate data, and using that data to design and test a heart-rate monitor. Juniors and seniors used iPods distributed to them for this class to record their own pulse rates.

Lisa Huettel, assistant professor of the practice, decided to use iPods in her class because they are essentially portable hard drives. She added a small, portable sensor that attaches to the iPod. Her goal was for students to learn how to collect and then deal with real-world data in their work. 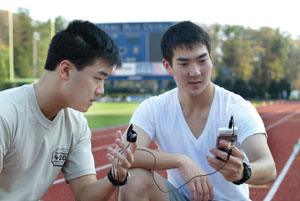 Anthony Lau and Vincent Mao get a reading on Lau’s pulse using iPods. The electrical and computer engineering majors use the iPods to collect
data.

“A primary challenge for the students is to learn to work with data collected under realistic, meaning imperfect, conditions,” Huettel said. “The students learn how to separate the signal they want, the heart beat, from sources of noise such as movement. Gathering their own data teaches the students the important lesson that signals are often not perfect.”

The first time the students worked with the iPods and sensors, they practiced by recording their resting pulse rates. In the lab that day, they got used to how the sensor worked, viewing samples on an oscilloscope, and exporting the data to a software program called Goldwave that will help them manipulate it.

In the next step, students took their iPods and sensors to the gym or the track to record their heart rates before, during and after exercising.

Using their collected data, students then started “signal conditioning.” They were interested in the heart rate data recorded, but of course the sensor picks up more than just that. The resulting sample is called “noisy” data.

Vincent Mao and Anthony Lau, both seniors, and both biomedical/electrical engineering majors, could already see what “noisy data” means.

“You can’t distinguish the beats,” he said, looking at the Goldwave image before him.

Student teams had to use software programs and their knowledge of what the data should be to clear out the extraneous data they don’t need.

The two seniors also used their iPods elsewhere. Since they are upperclassmen, they only received an iPod because of this class, and to say they are thrilled would be an understatement. Mao and Lau were both thinking about conducting an independent study project for next semester that would require an iPod.

Mao used his iPod to record lectures. Lau is used the iPod for his independent study class this semester, downloading CT images of vertebrae and carrying them around with him.

“It’s kind of like a backpack,” Lau said. “You store all your stuff on the iPod and bring it with you.”