In order to capture and carry forward class discussions begun by guest lecturers, Lucic records those classes with an iPod; then he posts the recordings on a class Web site for students to download and review on their computers or iPods.

Sophomore Ryan Sparrow got the assignment of leading a class discussion to further explore issues raised in two guest lectures, by Duke art history professor Anya Belkina, on her use of computer software to create video animations as works of art. 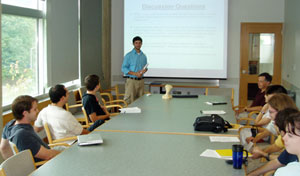 Sparrow explained one way he prepared for his presentation. “I downloaded the lectures from the [class Web site] and I put them on my iPod,” he said. “One of them I listened to while I was at work at the Provost’s office. I was upstairs in the attic doing some filing and I got to just listen to the lecture and take some notes.” (The recording from Belkina’s first lecture was particularly helpful for Sparrow, who had missed that class after staying up late to complete an engineering project.)

Listening to the recordings, Sparrow homed in on issues he thought would spark further discussion, such as Belkina’s thoughts about the potentially ephemeral nature of digital art and the transition from using a paintbrush to a computer . 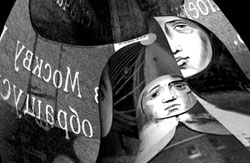 Professor Anya Belkina gave two guest lectures on using computer software to create artistic animations to a class in Duke’s Information Science and Information Studies certificate program. Listen to a portion of her first talk recorded with an iPod for students to review.

In his class presentation, Sparrow gave examples of technology intersecting with art — such as 3-D printers that “print” sculptures and animation software used to design movies like “Finding Nemo” — then posed his discussion questions. (Some students use their iPods to transport large multimedia files for their presentations, but Sparrow did not.)

Remarks from his peers ranged from how Japanese animé has created stars out of voiceover artists to the notion that computer programs themselves can be works of art.

Lucic said he plans to use audio segments of guest lectures to promote his course, which is part of Duke’s Information Science and Information Studies certificate program.

iPods were also a topic of class discussion later in the semester.