To bring to life the era when the old technology of broadcast radio was the country’s main source of popular entertainment, Duke professor Daniel Foster employed a new technology: iPods. Students in his “Radio: Theater of the Mind” course used the devices to listen to radio shows from 1920 to 1960, such as “Amos ‘n’ Andy” and plays by Orson Welles. They also used a recording attachment to produce their own radio dramas from existing scripts. 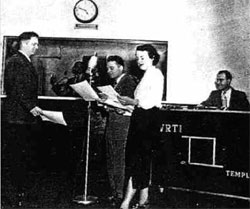 “There’s this whole chunk of cultural history that’s been forgotten,” Foster said about the Golden Age of Radio covered in his course. “So much of what we have [today] of TV and film is so indebted to radio.”

One example Foster gave was from “Three Skeleton Key,” a 1949 episode of the CBS show “Escape.” In it, three men in a lighthouse on the coast of French Guyana see a menacing ship approaching as Richard Wagner’s “The Flying Dutchman” plays in the background (listen to the clip). In class, Foster pointed out the dramatic elements — pauses, voice inflections, sound effects and the musical score — as well as the cultural significance of introducing Wagner’s nineteenth-century classical music to a popular radio audience.

“The way that many Americans come to… high cultural commodities like Wagner and Bach is through popular media like radio,” he said, and now TV and movies. For example, he said, “We know [Wagner’s] ‘Ride of the Valkyries’ because of [the film] ‘Apocalypse Now.’” 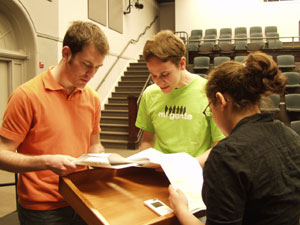 After listening to the classic radio dramas, students did their own productions of the shows, which are then made available on The mp3ater Project Web site.

As students get a sense of the old time radio dramas, Foster asked them to pick a script of one show and produce their own version of it. The students broke into groups and use iPods to record their parts. They then used audio editing software to mix in sound effects.

Sophomore Tiffany Chen chose to do a solo production of a radio version of the short story “The Most Dangerous Game” by Richard Connell — a story she remembers from high school as “unusual.” In it, a hunter named Rainsford falls off a boat and ends up on an isolated island where he becomes the game for another hunter.

“He starts as a man in control. But he slowly loses control as the story proceeds,” Chen explains. To capture that mounting tension, Chen employed techniques from class — mood music, voice inflection and sound effects she made as well as ones she found online. Recording herself with an iPod or a microphone attached to her computer, she used the audio editing software to alter her voice for the male parts.

At the end of the semester, the students’ productions were posted on a Web site Foster created called The mp3ater Project.

iPods are a good fit for the course because students use them in both the listening and producing aspects of the course, Foster said. “Pedagogically it killed a lot of birds with one stone.”

Listen to a clip of “The Flying Dutchman”