Snippets of songs — rock, rap, popular — burst from computers lined up on black lab benches. The songs are coming from students’ iPod digital music players, which are wired to circuit boards attached to the computers. The music is not only allowed in this engineering lab exercise, it is required.

In this lab for “Computational Methods in Engineering,” students picked ten seconds of a favorite song, stored on their iPods, to manipulate. They adjusted the rate at which the computer takes in samples of sound, break out individual frequencies, boost and lower frequency ranges and scramble pitch and beat. 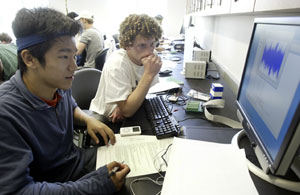 Lab instructor Professor Michael Gustafson explained why he decided to incorporate the devices into the lab. “Rather than spend any money buying signal generators, we could just use the free signal generators [i.e., the iPods] that Duke provides,” he said. Plus, he said, the music helps connect engineering principles to a familiar experience.

Sophomore Joanna Noble had done a similar lab exercise — but without the iPods — in another engineering class. “It makes a lot more sense in the context of the music,” she said.

In the lab, freshmen Corey Butler and Stesha Doku selected the song “Innocent” by rock band Our Lady Peace (listen to the clip of “Innocent” on the band’s Web site). After recording ten seconds of the song into a computer, they ran algorithms that raise or lower the strength of certain frequency ranges in the song, and then listened to how the change in frequency distribution affected the sound.

Next, Butler and Doku applied another algorithm to the original song, which switches around certain frequency ranges, effectively encrypting the song by altering it beyond recognition (listen to “Innocent” after it has been encrypted). Finally, they returned it to its original state by applying the encrypting algorithm three more times. 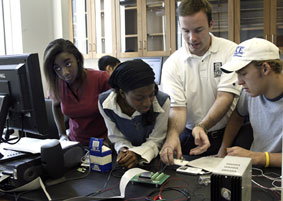 Butler, Doku and other students agreed the lab is more engaging using music from their own collections, than it would be using a tone generator.

You know your own music, freshman John Pura explained, so any changes to it are “readily detectable.”
In addition to learning engineering principles, students gained insight into their songs. Pura discovered in “100 Years” the lead singer of Five for Fighting “has a really, really high range.” And freshman Emmett Nicholas discovered the Red Hot Chili Peppers’ “Universally Speaking” “doesn’t have a really strong bassline.

And Gustafson gave the class a tip for do-it-yourself karaoke — just pick a song and filter out the frequencies in the range of the human voice.

Listen to “Innocent” after it has been encrypted Quicktime streaming