Students in Professor Anthony Kelley’s music theory and practice class carry around J. S. Bach’s “Saint Matthew Passion” on their iPods. They listen to the song at the gym, on the bus, in the bathroom, in the car — sometimes singing along.

“They’re going to hear Bach-style [music] the way they hear their own music,” Kelley says about integrating the iPods into his course. “You sing along to the radio, why don’t you sing along to Bach?”

Absorbing Bach’s musical style, particularly his chorales and “Saint Matthew Passion,” is the foundation for the course, in which students learn to recognize, sing and emulate his compositions. 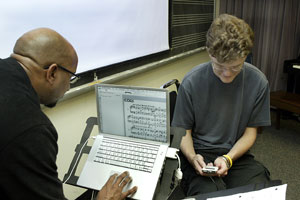 Junior Geoff Lorenz says Bach’s music is “so well textured” with many layers of melodic lines.

“If you take [Bach music] around and listen to it constantly then eventually you’re going to hear all the different layers,” he says.

Kelley says when he plays musical phrases in class that depart from Bach’s style, his students are often quick to notice the incongruity. “I’ve never seen a class so sensitive to error detection,” he says, although it is hard to determine how much of the class’s proficiency to attribute to introducing the iPods.

The next step the class is taking with digital music technology is to a kind of eighteenth-century karaoke.

The students are asked to input the notes for all four parts of a Bach chorale into a musical notation software program. Then, each student is supposed to remove the part — bass, tenor, alto or soprano — that he sings. With this missing-voice version of the song loaded on their iPods, the students have an assignment: play the song and practice singing your part, karaoke style.

At one class, with a CBS News TV crew filming for a story about iPods, freshman Stephen Clark won a class competition to best sing one part in a Bach chorale. Clark sang his part, tenor, as the other three parts played off his iPod, which was attached to the classroom stereo system. Clark says he practices his part, listening to his iPod, mostly on the bus — “humming, not singing loudly, but humming.”

Not everyone has taken to the digital music technology as readily as Clark.