First-year students Rita Baumgartner and April Edwards huddled around a speaker phone with their iPod digital devices set to record. They called the principal of Columbine High School, Frank DeAngelis, and began their interview. What was DeAngelis’ view of the infamous 1999 shooting spree at his school? Baumgartner and Edwards wanted to know. What was left out of subsequent news reports about it? And what was erroneously added?

The riveting half-hour interview with DeAngelis, captured on the women’s iPods, was part of a class project to examine how major events are remembered by various social groups and how cultural texts such as newspaper articles might influence or reflect such group memories. (Baumgartner grew up in Boulder, Co., a town near Columbine, and, based on advice from a family friend, arranged for the interview.)

The project for Professor Michele Strano’s Writing 20 course “Social Minds: Memory as Collective Practice” asked students, in groups of three or four, to conduct a dozen-or-so interviews about an event and then compare the responses to news articles about it. In addition to the Columbine shooting, students examined memories of the Apollo 11 mission, Clinton-Lewinsky scandal, Y2K, first Gulf War, O.J. Simpson trial, Apollo 13 mission and Chernobyl nuclear plant disaster. 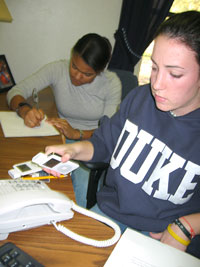 After writing essays about the interviews and the articles, the groups gave class presentations on how the news reports and the accounts given in the interviews may be related. The students were required to play clips from their interviews to support their points. The clips were incorporated into the students’ PowerPoint presentations as digital audio files that were played through a classroom sound system. Baumgartner and April Edwards, along with teammates Dean Chiang and Matt Edwards, concluded in their presentation that both the people they interviewed and the news stories they read interpreted the Columbine shootings through the lens of themes, or what they termed “myths.” The four students cited three prevalent myths: “end of innocence,” “perpetrators as victims,” and “personal responsibility.”

“If we could pinpoint one thing — if I could tell you the reason that [the student killers] Harris and Klebold committed this crime was because of A, B and C, then people can say, ‘Well, we’ll make sure that other students do not do A, B and C.’” DeAngelis said in a clip the students played. “But we can’t. We don’t know what the cause was. They took that to their grave with them.” Listen to DeAngelis’ remark about blame. Including audio excerpts in the presentations reinforces a key principle of writing, Strano says. “One thing we emphasize about academic writing is that researchers are expected to move beyond speculation and support their claims with some form of evidence,” she says. “You make a claim, and then you give data to support that claim. Incorporating the sound files made that expectation clear.”

“They started thinking of the voice files and the news articles on the same level,” she says. “Through their analyses of the interviews — which they recognized as raw, subjective data from the beginning — they began to realize that the news coverage was also data about how an event is framed.” 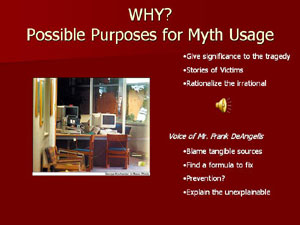 Strano has taught other writing courses with interview assignments, but she says, with the iPods, she was better able to guide students through the process of interpreting interviews because the students could easily send her the audio files of the interviews. “I kept all 84 interviews [done by the students] on my iPod,” she says. “It gave me access to the raw data in a way that allowed me to better evaluate how they interpreted it.”

Students said that recording the interviews with iPods and including clips in the presentation made the project more engaging.

“It helps us make our points better,” Matt Edwards says. “But it was a hassle getting all the to length.”

Listen to the beginning of the interview.