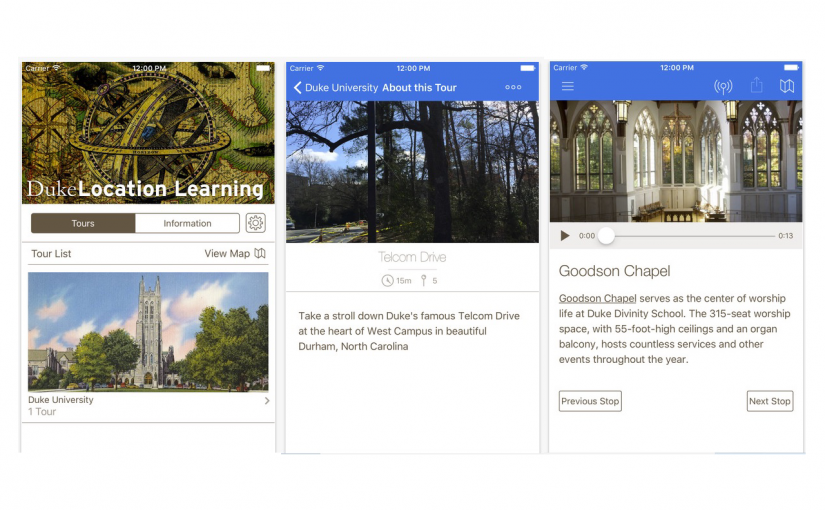 Since 2004 the Duke Digital Initiative (DDI) has facilitated the exploration of emerging technologies that provide innovative and creative enhancements to teaching and learning at Duke. Jointly managed by the Office of Information Technology (OIT) and the Center for Instructional Technology (CIT), DDI programs have helped to drive strategic innovations in instruction, learning, and undergraduate life by connecting our community with new and emerging technologies.

Robot Simulation on the Web for Online Robotics Education

Robotics is an increasingly popular topic in engineering MOOCs, but all existing offerings are primarily pen-and-paper based. The goal of this project is to build a robot simulation tool that will enable the development of hands-on online robotics education. The tool will be a light web client that communicates to a simulator backend running on a more powerful server. Basic components to build the software infrastructure for a web-based simulator, such as WebGL, WebSocket, and cloud hosting technology exist, but a significant software engineering effort will be needed to integrate these components with existing simulation software. The first phase of this project will build a preliminary rollout of the web environment for use in ECE 383 in Fall 2016. By 2017, the environment should be ready for public deployment.

Over the past three years, three Asian & Middle Eastern Studies faculty have been exploring “serious games” as a pedagogical strategy in teaching the humanities in general, and the culture of national and ethnic conflicts in particular. Introducing a few serious games in class showed both the limits of existing games and the great potential of games in general to transform radically the way culture and history are taught. The faculty have collaborated with the Dutch research firm TNO to develop a serious game to address the shortcomings of existing games used in exploring conflict and war situations. The gaming platform that they are developing emphasizes the importance of a humanistic education in the development of critical thinking, situational awareness, and complex decision-making skills and introduces complexity that rarely exists in currently available games. Two of the faculty attended the Serious Play conference (July 26-28, 2016, Chapel Hill, NC) to help gauge the current state of the field and to generate more ideas to improve their game play and the classroom pedagogy it enables.

Visualizing the Street; New Technologies of Visualization in a Global Context

This conference focuses on the ways that new technologies of visualization have changed social interactions for people around the globe. Today, digital practices of photographing, filming, and editing are available to everyone who carries a phone and is connected online, resulting in the mass circulation of privately produced imagery and changing the ways that people across the globe interact with, and are connected to, others. In the fall of 2017, Stein will teach a new course on Israel and Palestine which will focus on the ways that new technologies of visualization have altered the Israeli/Palestinian conflict. Through participation in this conference (June 16-17, 2016, Amsterdam, Netherlands), she expects to incorporate current research in new media studies and visualization technologies into her class and to identify ways to integrate technological themes and practices more robustly into her teaching.

Using new technologies to capture their experiences while studying abroad can help students bridge discomfort while allowing them to collect important documentation of linguistic or cultural practices. This project, using My Tours, will help students in the 2016+ summer program create virtual tours of their host cities, Montreal and Quebec City, thus creating a useful end-product that will summarize and showcase their work for assessment and enjoyment. My Tours is an application that allows the user to create a virtual walking tour of a city. Project goals are 1) to offer students a way to create meaningful information that is public facing; 2) to archive materials for future students; 3) to increase student comfort level with speaking a foreign language; 4) to give students a tool that will allow them to capture interviews, pictures, video and to organize that information in a meaningful, personal way; and 5) to create a product that will collect language production in all three modes so we can assess it according to national standards of practice.

Note: This project is well underway. Try it for yourself on the Apple App Store or on the Google Play store.